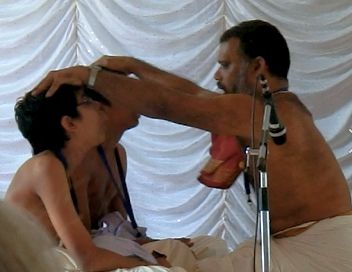 Due to concerns over the spread of COVID-19 the event has been cancelled.

The Veda is the ritual corpus compiled by Brahmin priests, the people of the most privileged class in ancient Indian society. It is not a laborers’ product that Karl Marx claimed becomes an object that “exists outside them independently” and “an autonomous power confronting them” in spite of its origin in their labor (“Estranged Labour, XXII,” in: Economic and Philosophic Manuscripts of 1844). On account of its rigorously disciplined transmission system, however, the Veda was thought to be the revealed scripture (śruti) without an author (apauruṣeya) in the post-Vedic and classical eras. In the early medieval Mīmāṃsā school, it was considered even to have the power of urging the hearer to follow the Vedic tradition. This urging power of Vedic injunctions (vidhi) is called “verbal force for activity” (abhidhābhāvanā) by Kumārila (ca. 560–620) and “enjoinment” (niyoga) by Prabhākara (younger contemporary of Kumārila).

In an extensive digression embedded in his commentary on the second chapter of Dharmakīrti’s Pramāṇavārttika, the Buddhist Prajñākaragupta (ca. 750–810) contends that the urging power of Vedic injunctions is nothing but a fiction of Brahmanical ideology,  indicating a number of theoretical difficulties. He criticizes Kumārila’s theory of bhāvanā as well as Prabhākara’s theory of niyoga, adopting two different schemes respectively. At Prajñākaragupta’s time, Kumārila’s school (Bhāṭṭa) and Prabhākara’s school (Prābhākara) were in dispute with each other about how a Vedic injunction influences the hearer, with both schools taking it for granted that the Veda has no author. Since only a very few Mīmāṃsā works of this period survive, Prajñākaragupta’s references are very valuable. However, his knowledge about Mīmāṃsā was limited due to his position as a critical outsider, so that one should also consult the relevant sections of Kumārila’s and Prabhākara’s works (the Tantravārttika and the Bṛhatī). At Prajñākaragupta’s time, moreover, the Prābhākaras may have been powerful in the Mīmāṃsā school in contrast to the late medieval time when the Bhāṭṭas were dominant. Prior to Prajñākaragupta, Maṇḍanamiśra (ca. 660–720) vehemently criticized the Prābhākaras’ theory of niyoga in his Vidhiviveka. Therefore, it is also necessary to examine whether Maṇḍanamiśra’s criticism influenced Prajñākaragupta’s arguments against the theory of niyoga.

Prof. em. Kiyotaka Yoshimizu received his PhD from the University of Vienna in 1994. He is now research fellow of Toyo Bunko after having retired from Tohoku University as a professor in 2017. He studies Mīmāṃsā paying attention to other fields of Indian philosophy and religion, mainly Vedic religion, Vedānta, Buddhist philosophy, Sanskrit grammar, and Dharmaśāstra, as far as they are related to Mīmāṃsā. He is especially interested in the period of early medieval India, in particular the sixth and the seventh centuries when Kumārila and Prabhākara were active. For his publications, see https://toyo-bunko.academia.edu/KiyotakaYoshimizu.

Please note that Prof. em. Kiyotaka Yoshimizu will be giving a lecture related to the workshop's topic at the ISTB at 17:00.

The workshop, as well as the lecture held at the ISTB, are part of the "Vienna–Tsukuba Exchange". Kindly register your workshop participation by 12 March 2020 with an email to patrick.mcallister(at)oeaw.ac.at.