Aquilegia is a plant with strikingly beautiful flowers with around 70 species extending across the Northern Hemisphere, four of which are found in Austria. This diversity is driven by a process called adaptive radiation, whereby new species arise quickly because they adapt to new environments. In Aquilegia, this process has resulted in species with a wide array of flower color and shapes, which can be bred with one other to generate the myriad of showy flowers that are a favorite of gardeners.

With the aim of understanding Aquilegia’s evolutionary history and how adaptive radiation works, a multinational consortium led by postdoc Daniele Filiault from the lab of Magnus Nordborg at the Gregor Mendel Institute of Molecular Plant Biology of the Austrian Academy of Sciences published the genome sequence of eleven different Aquilegia species in the journal eLife. 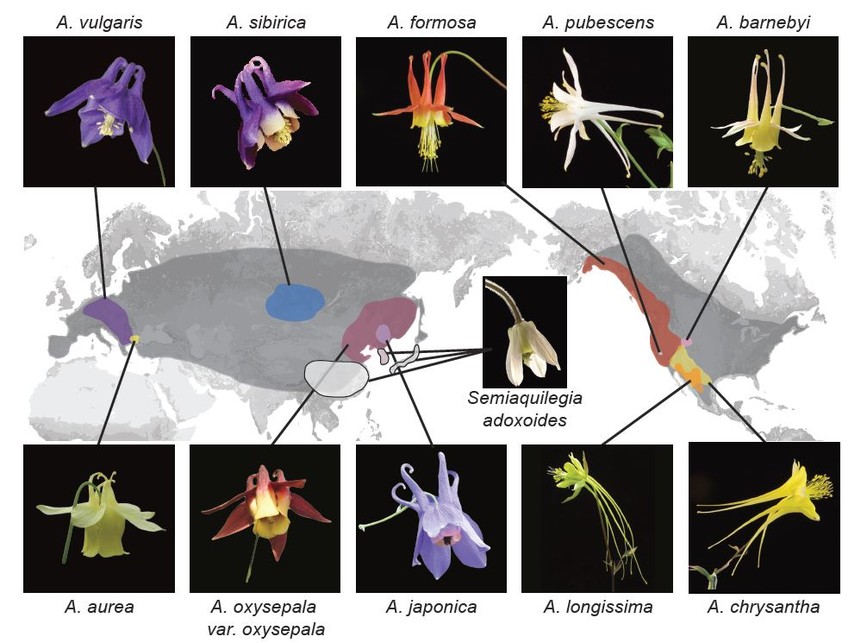 The researchers found that genetic variation was widely shared between the eleven different species, even over large geographic distances.  According to Magnus “This reinforces our modern understanding that speciation is (generally) not a simple event where populations of one species become reproductively isolated and then become two.  Instead, its a long, convoluted process where different populations cross back and forth over long periods of time, sharing genetic information along the way.”

Remarkably, the researchers also found that one of Aquilegia’s seven chromosomes was evolving differently than the rest. This chromosome had fewer genes than the rest of the chromosomes and was around twice as diverse as the other chromosomes in the genome. According to Daniele “This is the first time, with the exception of sex chromosomes, that anyone has observed a single chromosome evolving completely differently from the rest of the genome and, frankly, we don’t yet understand why.  I want to continue focusing on this specific chromosome because I think these findings are going to help bridge different fields of scientific thought.  On the one side, population geneticists study evolution by looking at DNA changes over time, and on the other side, genome biologists focus on the evolution of chromosomes themselves.  Our results suggest that we can combine ideas from both these fields to increase our knowledge of how entire genomes evolve.”

Taken together, this work provides the tools that researchers can now use to understand how adaptive radiation has generated the amazing floral diversity found in Aquilegia today. Importantly, understanding how this has occurred in the past may allow researchers to model how plant species will adapt in the future to a changing climate.