Repatriation of recordings of indigenous vocal music in Western Amazonia

In a solemn ceremony on 16 July 2017, Bernd Brabec de Mori handed over a collection of audio-visual recordings and their documentation to the indigenous university UCSS Nopoki Atalaya. This event took place during the conference “Encuentro internacional de investigación colaborativa intercultural”, held at this institution in Atalaya, Ucayali Province, Perú. Internationally renowned scholars and indigenous researchers, representatives of indigenous communities as well as students and teachers of the university were invited. 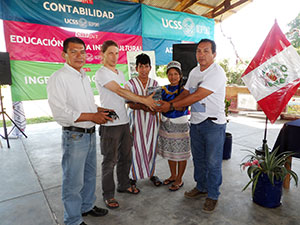 The recordings were made between 2004 and 2006 by Bernd Brabec de Mori in cooperation with several indigenous research partners in the course of the research project “IMUI – Investigación de música indígena en el valle del rio Ucayali” (funded by a DOC scholarship from the Austrian Academy of Sciences). Subsequently archived at the Phonogrammarchiv, they comprise songs from the indigenous groups of the Yine, Asháninka, Ashéninka, Amin Waki, Shipibo-Konibo, Iskobakebo, Kakataibo, Kukama-Kukamiria, Kechua and Kichwa.

The collection handed over consists of 43 edited CDs and three DVDs as well as, in addition, a hard disk drive containing the audio and video recordings, the CD/DVD covers and Bernd Brabec de Mori’s PhD thesis. The CDs had been compiled and edited by Brabec during his field research in order to repatriate the songs to the respective village communities and individuals. Since a great number of these CDs had meanwhile become broken or lost (or had never reached their destinations in the first place), a complete set was handed over to the Nopoki University. This – together with the files on the hard disk drive – will ensure that new copies for the respective communities can be produced at any time, and that the data are available for teaching and regional research projects.

Moreover, Bernd Brabec de Mori presented the recordings of the Yine group to Rittma Urquía Sebastián (Ministerio de Cultura) so that they can be considered in her ongoing work for a dictionary of this language. Finally, through the good offices of linguist Carolina Rodríguez, the corpus of recordings of the Iskobakebo is likewise being repatriated to the source community.