Dive Into the World of Deep Space

The OeAI presented a virtual 3D tour through the late antique and medieval Egyptian fortress of Hisn al-Bab as part of the Ars Electronica Festival. 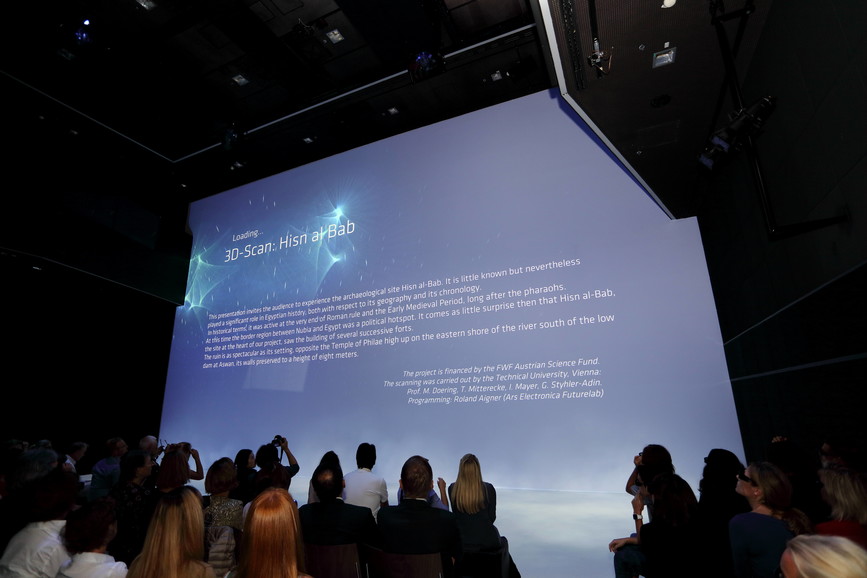 Equipped with 3D glasses around 150 visitors were able to experience a virtual tour of the Egyptian fortress of Hisn al-Bab from the 5th-10th century during the Ars Electronica Festival in Linz this year. It was almost as if we were directly on site in southern Egypt: we followed the old path from the Nile to the imposing gate and reached the fortress. The virtual trip was guided by Dr. Pamela Rose of Cairo Branch of the OeAI who has been studying the fortress of Hisn al-Bab archaeologically together with her team since 2011.

Science meets technology in deep space 8k
The excavated monuments of the fortress were scanned with a 3D laser scanner as is common on archaeological excavations today. On the basis of these scans by the TU Vienna the team of the Ars Electronica Future Lab of the Ars Electronica created a 3D visualization. This was publicly presented in the Deep Space, a room with a 16 times 9 meter wall and floor projection in 8k resolution.

Preservation for the future
The 3D visualization makes it possible for tourists to experience the fortress, a site not accessible today. Since the monument itself is endangered especially by illegal excavations and the environment, such as torrential rain, such a visualization is not only a prerequisite for sustainable conservation measures but also an important way of documenting the research results for the future.

Political hot spot along the Egyptian-Nubian border
The fortress of Hisn al-Bab is located within sight of the temple of Philae by Aswan high above the bank of the Nile. It is located in a border area between the Egyptian State and the Nubian kingdom where these two different cultures time and again clashed in late antiquity and the Middle Ages. The pottery finds from the kitchen and storage rooms together with the evaluation of the botanical and zoological remains provide a clear picture of the way of life of the inhabitants of the fortress and their trade relations. The often bellicose daily life is reflected by several skeleton finds with clear signs of severe injuries.

The event was opened by the Head of the Ars Electronica Center Christoph Kremer, the Upper Austrian governor Thomas Stelzer, the ambassador of the Republic of Egypt Omar Amer Youssef, the head of the Cultural Policy section of the Foreign Ministry Teresa Indjein and the director of the Austrian Archaeological Institute Sabine Ladstätter as well as the director of the Cairo Branch of the Austrian Archaeological Institute Irene Forstner-Müller.

The event was organised in co-operation with the Ars Electronica Center.