Detective Work in the Desert Sands

The OeAW archaeologist Irene Forstner-Müller is head of the Austrian-Egyptian excavations at Kom Ombo. Over 5,000 years of history are concealed there in the desert sands. The researchers have already made a number of surprising discoveries. Many still need to be deciphered. 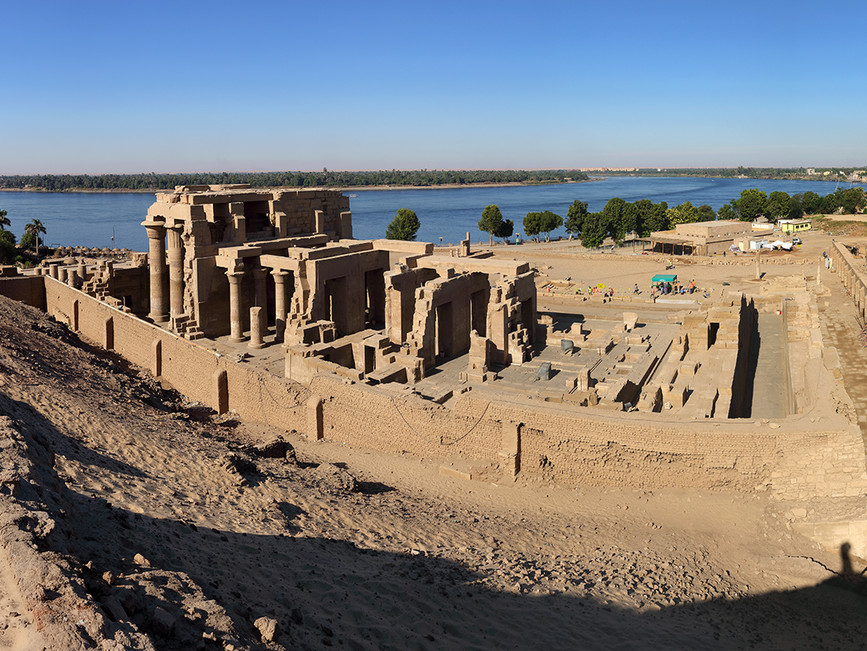 Overview with Ptolemaic temple and the excavation of the ÖAI in the background (Photo: OEAW-OeAI)

"Archaeology is a little bit like detective work," says Irene Forstner-Müller, researcher at the Austrian Archaeological Institute at the Austrian Academy of Sciences (OeAW). There is plenty to do in Kom Ombo. The site contains evidence from the prehistoric up to the modern period. Traces of settlement that probably extend back to the early history of Egypt. Evidence of an important city already in the 3rd millennium B.C. Yet also an English fortress dating to 1886. "It is all very exciting", beams Forstner-Müller. At the site located 45 km north of Aswan, excavations have taken place under her directorship since 2017. Forstner-Müller and her team are entering uncharted territory with the project, a collaborative effort with the Egyptian Ministry of Antiquities (MoA): although Kom Ombo is indeed well known for its temple of the Greco-Roman period, the city itself has hardly been studied until now. That is all changing now.

Which significant discoveries have you made until now?

Irene Forstner-Müller: Last year we had unbelievable luck with the location at which we had begun to excavate. We immediately cut into a section there where we were able to understand the transition between the cemeteries that lay outside the city, a type of fortification, and an administrative region inside the city. We were able to date this to the so-called First Intermediate Period, that is, to ca. 2216–2025 B.C. When we laid out a deep section there, to our great surprise we encountered parts of an even older building. It belongs to the Fourth Dynasty, the period of the pharaohs Cheops and Chephren, the builders of the famous pyramids in Giza. We therefore have evidence that Kom Ombo was already a functioning city in the first half of the third millennium B.C.

How do you know that these buildings represent an administrative region?

Forstner-Müller: We found rooms there with storage objects in which grain was probably stored. In ancient Egypt grain served as currency. From this we could conclude that we are dealing with an administrative centre here. With the excavations in the English fortress it is easier: what is great about this is that the British army documented everything very precisely. Here we know the functions of the rooms and don't have to speculate.

Are there particular highlights amongst the finds?

Forstner-Müller: The highlight of 2018 was a large number of seal impressions. In ancient Egypt, wares were always provided with clay seals in order to identify the owner – or to ensure that nothing was stolen. And we found many seal impressions with names of pharaohs of the Fifth Dynasty. This means that already in the mid-third millennium B.C., there were close connections between Memphis, the residence of the pharaohs at the time, and Kom Ombo.

Has the excavation of the English fortress also brought special finds to light?

Forstner-Müller: Yes, there we have even found an Austrian connection: a fez. This type of headgear was very popular in Egypt in the 19th century. And Austria at that time was the main producer of fezes which were then exported to Egypt.

The third season of excavations begins in October 2019; what are your plans for it?

Forstner-Müller: We hope to gain more information about the age of the city. That is: when was it inhabited for the first time? The long-term goal is to obtain a total picture of the city. Where precisely are the administrative centres? Where are the cemeteries located? Where do the branches of the Nile flow, and at what period? In 2019 we were also able to begin a project, funded by the research fund of the FWF, on Kom Ombo in the Old Kingdom, that is, in the third millennium B.C. We are very grateful for this, it's really helping us a lot.

What brings you the greatest satisfaction in your work?

Forstner-Müller: Figuring something out, or understanding connections - when one suddenly realises, for example, "Oh! That's an administrative building!" I would like to know above all how ancient Egyptian society functioned. Finding out something about that gives me more satisfaction than finding, for example, a gold vessel.