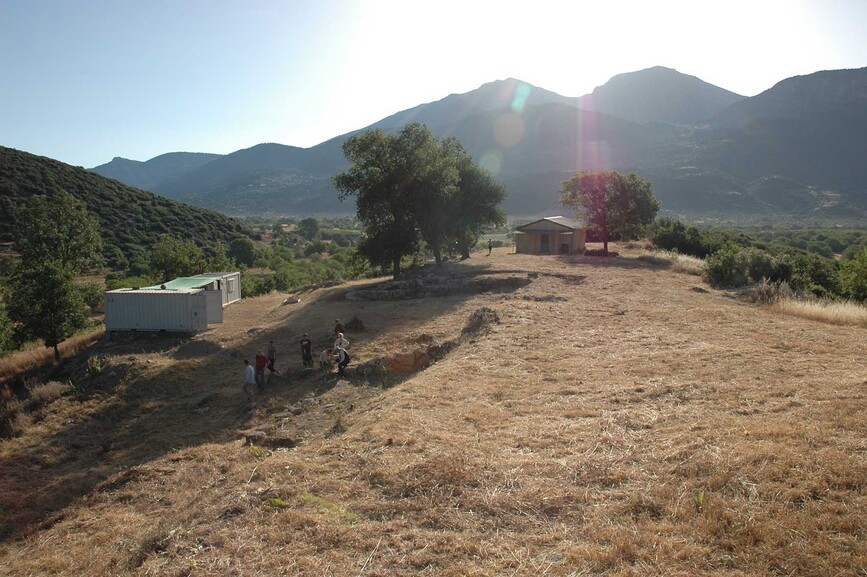 In the 1960s, Evangelia Protonotariou-Deïlaki discovered Middle Bronze Age settlement remains at the south-eastern foot of the acropolis of Archaia Pheneos (Arcadia). However, it was unknown that the acropolis itself was inhabited in the Middle Helladic period, too. Excavations carried out 2011–2015 on the acropolis of Archaia Pheneos in collaboration between the Ephorate of Antiquities of Corinth, the University of Graz (Institute of Archaeology) and the Austrian Archaeological Institute, Athens Branch, under the direction of Konstantinos Kissas and Peter Scherrer revealed a stratified Middle Helladic settlement sequence underneath the Late Classical city-wall. Contexts and finds are of particular importance as only few Middle Bronze Age sites from this remote region of the Peloponnese are known so far. According to the results of the new excavations the acropolis of Archaia Pheneos was inhabited throughout the Middle Bronze Age. The ceramic repertoire covers the typical range of a settlement assemblage with fine wares, coarser household pottery including cooking vessels and storage containers. This lecture presents first results of our archaeological and scientific research as well as of the study of forming techniques applied for manufacturing certain vessel types.

The analytical work done by Clare Burke has identified a number of local paste recipes in use at the site with a range of different clay preparation techniques, such as clay mixing and tempering. The results suggest the presence of multiple potters supplying the community who produced a wide range of vessel types and finishes, using both high and low firing conditions. The presence of these fabrics in samples from the Early Bronze Age and the Late Bronze Age, indicates the area sustained long held potting traditions whereby potters continued to use the same raw materials but adapted their chaîne opératoire for the production of new shapes and styles that came into fashion.

For a better understanding of the past potting traditions other aspects of the chaîne opératoire, such as the building techniques, were taken into consideration. Marks on the surface and the sections of the sherds indicative of the manufacturing techniques were examined carefully. Based on these marks and for further comparisons with the ancient ceramics, Georgia Kordatzaki reproduced a series of pots, focusing mainly on goblets and matt-painted closed vessels. The current study shows that particular handmade forming techniques including mainly coil-building, pinching and paddling were applied throughout the Middle Bronze Age at Archaia Pheneos.