Archaeologists of the Austrian Academy of Sciences have found an important early example of the alphabet at Tel Lachish, Israel, from around 1450 BC. The find shows that the alphabet was not introduced to the Levant by conquering Egyptians as was previously thought. The researchers report about their findings in the journal „Antiquity“. 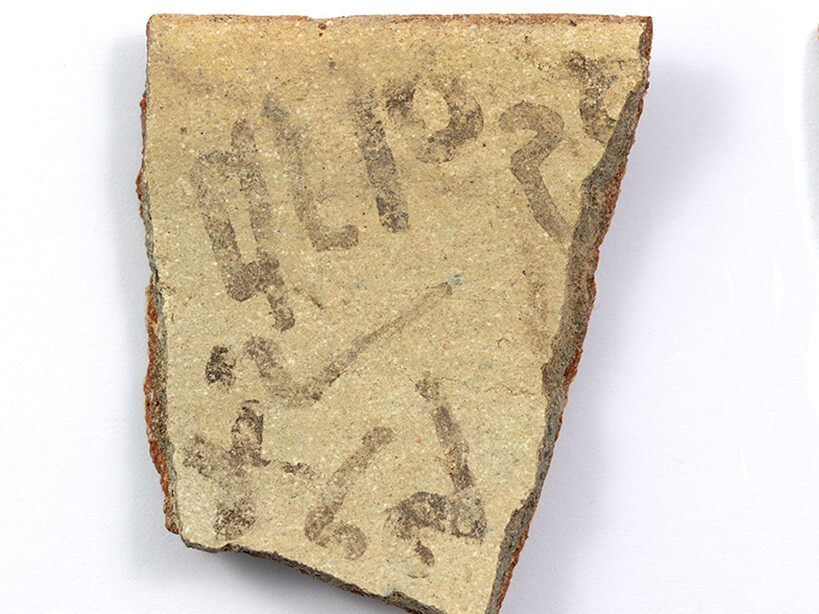 Archaeologists of the Austrian Archaeological Institute of the Austrian Academy of Sciences working in Israel have found an early example of the alphabet from the Bronze Age that helps fill a gap in its early history. Researchers had previously found evidence of the alphabet developing in the Sinai peninsular, around 1800 BC and eventually spread to the Levant around 1300 BC. From there, it began to spread around the Mediterranean, eventually developing into the Greek and Latin alphabets.

However, the evidence between the emergence of the alphabet in the Sinai and its arrival in the Levant was lacking. As such, this new find – an inscription on a pottery sherd dating to around 1450 BC – serves as an important ‘missing link’ for this gap in the alphabet’s history.

One of the earliest examples of the alphabet in Israel

“This sherd is one of the earliest examples of early alphabetic writing found in Israel,” said Felix Höflmayer from the Austrian Academy of Sciences and lead author of the research. The discovery was made by an Austrian archaeological team at the site of Tel Lachish in the Shephelah region, in modern-day Israel, and published in the journal „Antiquity“, which is published in partnership with Cambridge University Press.

At the time, Tel Lachish was an important settlement mentioned in ancient Egyptian documents from the period. It appears to have been a hub of activity, with imports from Egypt, Cyprus and the Aegean, along with several monumental structures. It was near one of these that the sherd was found. The pottery fragment itself is just under 4 cm tall and appears to have been part of the rim of an imported Cypriot bowl. The inner surface is inscribed in dark ink, preserving a handful of letters written diagonally.

Dramatic impact on the understanding of the alphabet’s history

These serve as a snapshot of early alphabet history, with most of them still similar to the Egyptian hieroglyphs they were originally based on. Although the fragmentary nature of the sherd makes translation difficult, the researchers suggest it may spell out ‘slave’ – perhaps part of someone’s name – and ‘nectar’ or ‘honey’. Whilst the meaning of the inscription may be unknown, it still has a dramatic impact on our understanding of the alphabet’s history.

The team hopes to carry out further excavations at the site, hopefully shedding more light on this important period of the early alphabet’s history.

The Austrian excavations at Lachish are conducted within the framework of the project ‘Tracing Transformations’ funded by the Austrian Science Fund (FWF) and hosted by the Austrian Academy of Sciences. ‘Tracing transformations’ explores the history and chronology of the late Middle and early Late Bronze Age in the southern Levant. This period saw the demise of the Middle Bronze Age city-states, the end of the Hyksos Empire in Egypt, and the rising interest and involvement of the Pharaohs in the Levant, culminating in the military campaigns of the Thutmosid period and leading eventually to the ‘International Age’ of the Late Bronze Age Amarna period.

„Early alphabetic writing in the ancient Near East: the ‘missing link’ from Tel Lachish“,