It is one of the largest theatre buildings of antiquity: the theatre of Ephesos. OeAI Researchers have now deciphered its construction history – from its construction in Hellenistic times to the restoration and consolidation measures from the 20th century onwards. This makes a precise chronology of the individual construction phases possible for the first time. 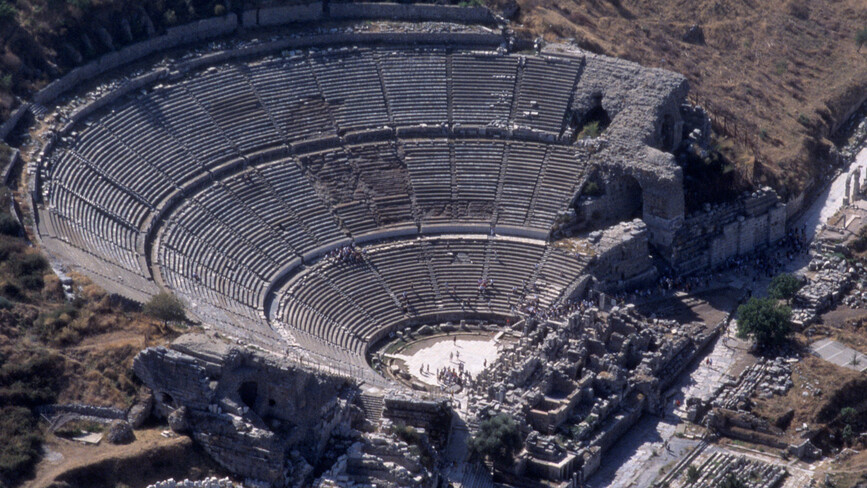 The theatre of Ephesos was already reported in the New Testament. An angry crowd is said to have gathered in the theatre to take action against the apostle Paul. However, the people of that time had a completely different view of the building than visitors today. At that time, the theatre did not consist of the huge vaulted access corridors that were later built for smooth access of large crowds to the auditorium. This expansion only began towards the end of the 1st century CE. By the first half of the 2nd century CE, the Ephesian theatre was then expanded into one of the largest theatre buildings of the Roman imperial period in Asia Minor.

New findings on the structural changes to the monument from the Hellenistic period until its abandonment at the beginning of the 7th century have now been published in an open access publication by researchers from the Austrian Archaeological Institute at the Austrian Academy of Sciences. The results of investigations from 2003 to 2011 were comprehensively analysed and compared with other theatre buildings, with the Institute's research on the structure even going back to the 19th century.

Precise chronology of construction phases possible for the first time

Until now, however, answers to key questions such as the shape and size of the Hellenistic theatre and how Roman architecture adapted the earlier building were still missing. »In order to be able to decipher the ancient inventory, it was important to understand not only the ancient and late antique-early Byzantine construction phases, but also the intention of the modern 20th century alterations and additions to the monument«, says Gudrun Styhler-Aydın, building historian at the OeAI. This was made possible by the close cooperation between the various archaeological disciplines and building research.

»With the results of the building research on the auditorium, it can now be shown, in addition to the known information from inscriptions, on the one hand, exactly how the building was expanded in the Roman imperial period into one of the largest known theatre spaces in Asia Minor with a maximum extension of almost 150 metres«, says the researcher. »On the other hand, the structural measures and conversions in the late antique-early Byzantine period vividly illustrate the historical efforts to preserve and continue to use the theatre, including all the local restrictions caused by destruction.«

Reconstructions are a stroke of luck for research

Since the theatre was intensively used as a material resource due to its long history of decay, the condition of its appearance after the Roman reconstruction phases in the middle of the 2nd century is hardly comprehensible today. Many components, such as the once representative marble furnishing, are missing. In addition, the auditorium was buried until the 1970s. It was only through the complete uncovering and the use of high-quality 3D laser scans from the 2000s that the monument could be documented as it has been preserved.

Since then, the exposed substructure of the seating steps, stairs and walkways has been clearly visible, revealing details about the construction of the monument and its damage. Severe damage, such as that caused by earthquakes, is visible in cracks in the façades. While the building was still in use, some of the high entrances were massively walled up for stability reasons and individual rooms were filled in so as not to endanger the safety of theatre-goers. This is a stroke of luck for researchers, because the finds contained in the filling material, such as pottery or coins, provide further clues to the chronology of the phases of use and decay.