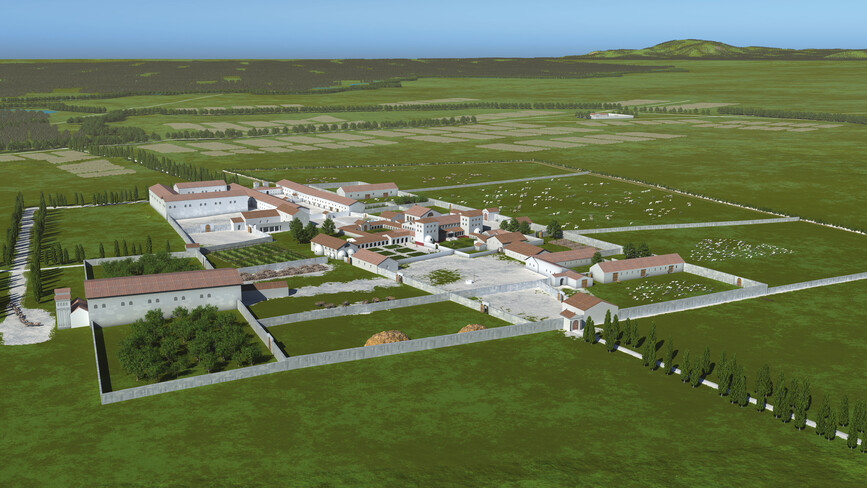 Bruckneudorf (Burgenland, Austria) is a traditional research site of the Austrian Archaeological Institute. The results of many years of archaeological excavation work as well as large-scale geophysical prospections by the OeAI, together with the data obtained during extensive monument protection excavations, are now being presented in summary to a broad public for the first time in the popular science publication »Villa – Wagen – Wirtschaftswunder. Römisches Bruckneudorf«.

Bruckneudorf was already a transport hub in ancient times. In the region where the A4/A6 motorway interchange is located today, a villa rustica was built in the late 1st century AD. The Roman fundus was implemented in the traditional territory of the Boii community (civitas Boiorum) living here. The Boii settled south of the floodplains of the river Leitha in simple pit huts of small dimensions, then in the course of the 1st century AD also in more spacious »Umgangshäuser«. The history of the region is and always has been determined by the important traffic routes, be it the rivers Leitha and Danube or the roads. Decisive for the ancient prosperity up to the culmination in the 4th century AD was the convenient location along the Amber Road, which led from the Adriatic to the Danube. The Leitha waterway provided a connection to the ore-rich foothills of the Alps as well as to the Limes.

By no means provincial - supraregional contacts since the 1st century AD

The large villa of Bruckneudorf in Late Antiquity, magnificently decorated with mosaics, developed from a simple farm with the additional function of a hostel in the 2nd century AD to a representative farm in the early 3rd century to the villa Murocincta of the 4th century AD. This very eventful history is reflected in a lively cultural exchange between West and East across all provincial borders of the Roman Empire. Whether the decorative fibulae of the 1st century AD, brought by the military from Alesia-Alise-Sainte-Reine (France) via Vindonissa-Windisch (Switzerland) to Northwest Pannonia, or the popular representations of dolphins with allusions to Venus in small art and sculpture, or the homage paid to the Bellerophon myth in mosaic jewellery based on oriental models – the material legacies from Bruckneudorf allow deep insights into the cultural contacts that shifted over centuries.

The community of the Boii of the 1st century AD was characterised by a conspicuous number of storage buildings of wooden post and beam construction. On the one hand, the pit houses were flanked by smaller silos, on the other hand, there was also a large-scale central storehouse in the settlement. On the one hand, this focus on storage suggests that the Boii, as civitas stipendiaria, paid their taxes in kind. On the other hand, it can be assumed that the sheltered location on the south bank of the river Leitha was a militarily organised gathering place for food supplies for the steadily expanding troop base in Carnuntum from the middle of the 1st century AD.

The function as a central storage site gained additional importance in Late Antiquity with a density of storage halls unparalleled in the region. The western part of the large villa of Bruckneudorf was occupied by huge three-storey storage buildings (horrea). In the 4th century, the estate had a central function as a logistics centre for grain and other foodstuffs for the entire large region in the Limes hinterland. The storage volume of the large buildings could supply 60,000 people for a year.