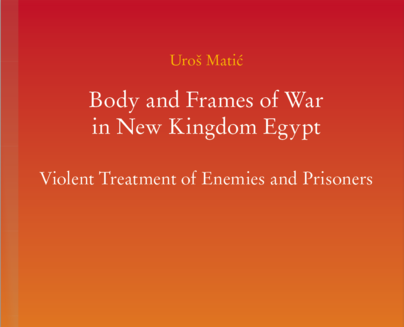 U. Matić. 2019. Body and Frames of War in New Kingdom Egypt. Violent Treatment of Enemies and Prisoners. Philippika 134. Wiesbaden: Harrassowitz.

The Egyptologist Uroš Matić is awarded for his monograph »Body and Frames of War in New Kingdom Egypt. Violent Treatment of Enemies and Prisoners«, Philippika 134, Harrasowitz Verlag, Wiesbaden 2019 with the »OeAW Best Publication Award«. He submitted the work in 2017 as a doctoral thesis at the Institute for Egyptology and Coptology at WWU Münster.

The Best Publication Award is given for the best scientific work in the field of humanities at the OeAW - monograph or article - published or accepted for publication in a peer-reviewed publishing house or journal no more than two years before the submission deadline.

Body and Frames of War in New Kingdom Egypt deals with the relation between violence and the bodies of enemies and prisoners of war in New Kingdom Egypt (ca. 1550/1070 BC) through the lens of "frames of war" (J. Butler). Archaeological, textual and pictorial sources on military violence (torture, mutilation, execution) are examined with various methods. Numerous attestations of caging, branding and marking, cutting off hands, cutting off phalli, cutting off ears, eyes gouging, strangling, burning, impaling and decapitation of enemies are analysed in detail and compared with treatments of the dead in the Underworld and criminals in ancient Egypt. Uroš Matić for the first time comprehensively compares divine and state violence in ancient Egypt. He discusses evidence from physical-anthropology (skeletal remains) and chooses a constructivist approach to textual and pictorial representations of violence. Bodies of enemies are understood as objects and media of violence. Several theoretical models are consulted in the examination of the material. It is argued that there was a difference in violent acts committed by the king and those committed by the soldiers. The king treats the enemies in the same way as deities and demons treat the dead in the Underworld. The violence committed by soldiers, on the other hand, is mundane and has no religious background. This difference strengthened the divine nature of the king.

In 2018, Uroš Matić already received the Philippika Prize of the Otto Harrassowitz publishing house for his monograph. Uroš Matić moved from the WWU to the Austrian Archaeological Institute of the OeAW's Cairo branch in 2019, where he is working on the research project "City and Hinterland of Kom Ombo".