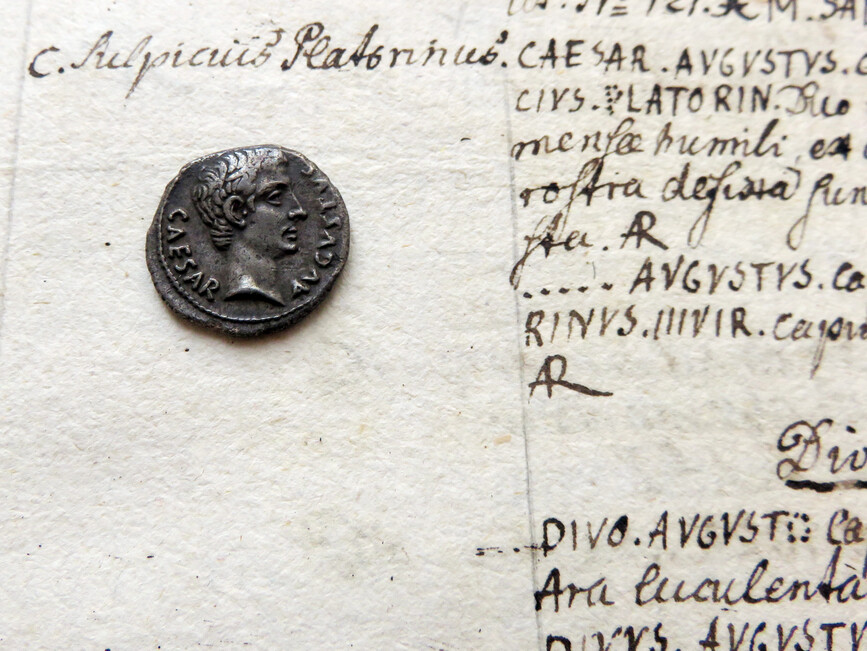 At the end of June 2022, the team of »Fontes Inediti Numismaticae Antiquae« (FINA) Vienna visited the Augustinian monastery of Sankt Florian in Upper Austria, near Linz. During a two-day research stay, Bernhard Woytek, Patrick Fiska and Daniela Williams could view and study archival material pertaining to the monastery’s coin collection.

The small town that grew out of the convent of the Augustinian Canons Regulars is better known today for being the final resting place of the 19th-century Austrian composer Anton Bruckner and attracts many tourists, who pay a visit to the imposing »Bruckner Organ« in the monasteryʼs basilica.

However, in the past, Sankt Florian was a major attraction for many generations of numismatic students and scholars since it housed one of the largest and richest collections of ancient coins in the Habsburg Empire – second only to the imperial cabinet in Vienna.

In 1747, the collection was acquired from Apostolo Zeno (1668–1750), a Venetian man of letters and court poet to Emperor Charles VI, following an evaluation of its scholarly importance by the Austrian numismatist Erasmus Frölich SJ (1700–1758). It consisted of more than 10,000 ancient coins and was cherished in the monasteryʼs library for about two hundred years, until it was sold by the convent through the auction house Dorotheum in three sales between 1955 and 1957.

Only a few numismatic remnants currently testify to the magnificence of the past, while hundreds of manuscript pages have remained untouched in the archives instead. They are currently being studied in the framework of the international initiative »Fontes Inediti Numismaticae Antiquae« (FINA), which aims at collecting, studying, and publishing manuscript evidence related to ancient coins and ancient numismatics that was created before ca. 1800.