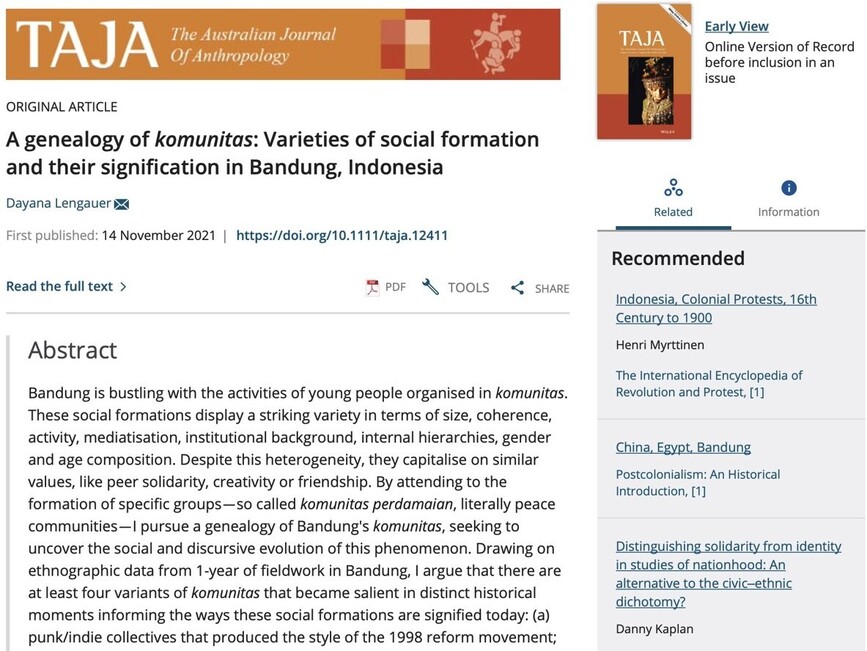 ABSTRACT
Bandung is bustling with the activities of young people organised in komunitas. These social formations display a striking variety in terms of size, coherence, activity, mediatisation, institutional background, internal hierarchies, gender and age composition. Despite this heterogeneity, they capitalise on similar values, like peer solidarity, creativity or friendship. By attending to the formation of specific groups—so called komunitas perdamaian, literally peace communities—I pursue a genealogy of Bandung's komunitas, seeking to uncover the social and discursive evolution of this phenomenon. Drawing on ethnographic data from 1-year of fieldwork in Bandung, I argue that there are at least four variants of komunitas that became salient in distinct historical moments informing the ways these social formations are signified today: (a) punk/indie collectives that produced the style of the 1998 reform movement; (b) groups of young entrepreneurs that popularised creativity as Bandung's trademark in the 2000s; and (more recently) (c) Islamic proselytisation; and (d) peace movements, both of which epitomise creativity and solidarity, yet on different scales and to different ends.

A genealogy of komunitas: Varieties of social formation and their signification in Bandung, Indonesia - Lengauer - - The Australian Journal of Anthropology - Wiley Online Library