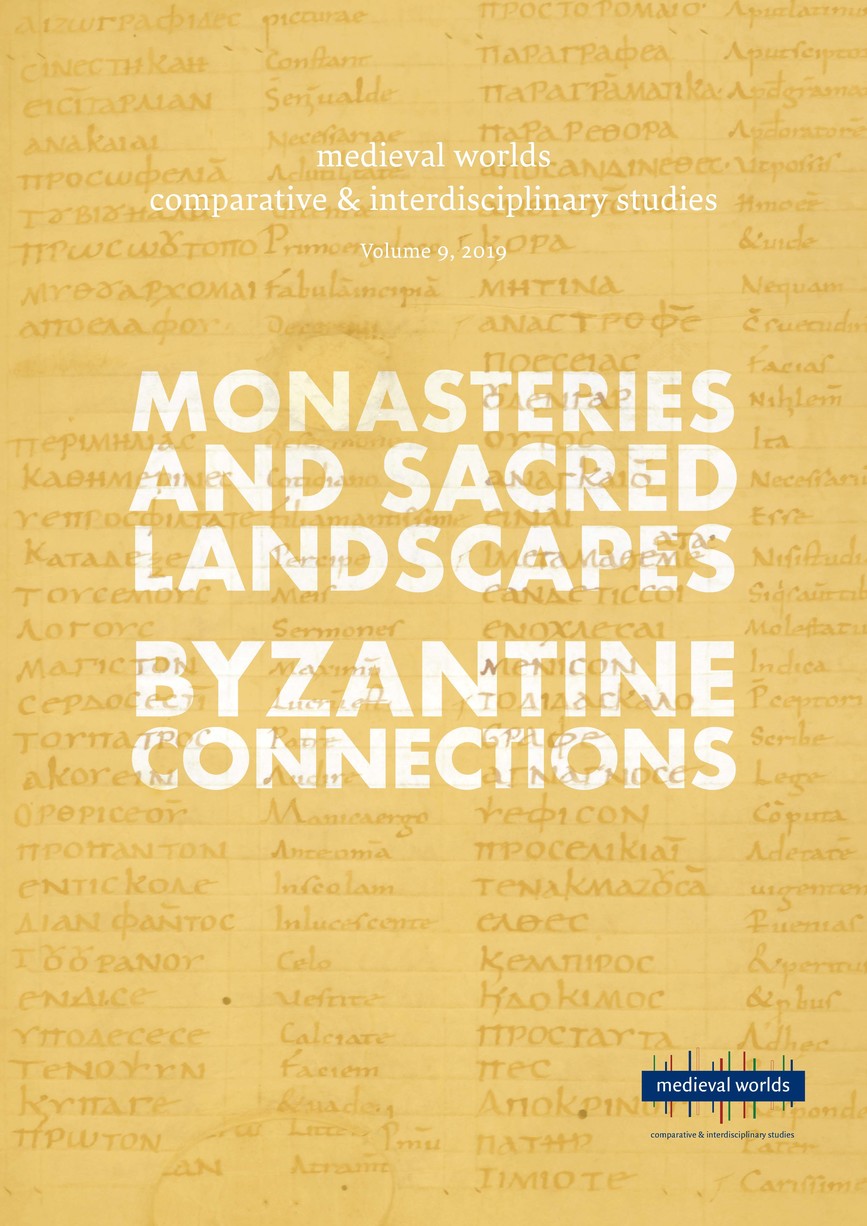 We are happy to announce that on 1 July the summer issue of our online journal Medieval Worlds has been published under the title Monasteries and Sacred Landscapes & Byzantine Connections. As the title indicates we present contributions grouped around two different topics.

In our cluster Monasticism and Sacred Landscapes we have assembled articles discussing the interaction of monastic institutions with their environment. For example, how much does a change in religious practice resonate in the environment of a monastery? At the Cambodian Khmer capital of Angkor Thom the transition from a remote Brahmano-Buddhist royal cult to more socially inclusive Theravāda Buddhist practices (13th-17th c. CE), apparently led to a substantial remodelling of the city, in which prayer halls (vihara or praḥ vihar) and other buildings related to Theravāda Buddhist monasteries replaced the traditional Brahmano-Buddhist temple mountains. However, architectural evidence suggests not only that the temple mountains have been incorporated in the new layout as striking landmarks for the new religion, but also that non-religious infrastructure in the city (the road-grid, for example) has been adapted for religious purposes. These conclusions were made possible by a thorough investigation of data acquired from two seasons of site investigations within Angkor Thom, which the author Andrew Harris presents in An Old Ritual Capital, a New Ritual Landscape. In late antique Gaul possible sources to derive information on the impact of the monks’ interaction with their human and natural environment are scarce. The founding myths of cloisters in such places as Marmoutier, the island of Lérins or the Jura Mountains, recur to Christian and Roman literary topoi, when they speak of isolated places and harsh environments devoid of any other human presence, which the monks sought to establish their cells and monasteries. However, their cooperation with local communities was essential for their subsistence, as Matheus Coutinho Figuinha points out in his article Pro qualitate loci et instantia laboris. In it, the author confronts these founding myths with archaeological evidence to explore the interaction between the monks and their human and natural environment (4th-5th c. CE). The consequences of monks establishing new monasteries are well documented in another region: Mount Athos. This peninsula, along with the Chalkidiki pensinula, had been well settled and apparently been under administrative control of the Byzantine Empire from the eighth century onwards. Invasions and raids in the ninth and tenth centuries devastated vast tracks of land, thus driving local inhabitants to resettle in other regions. Towards the end of the ninth century, the remote and depopulated area became a popular spot for monks seeking solitude. However, with their establishment of large religious communities, such as Xèropotamou, Lavra and Iviron (10th c. CE), territorial gain seems to have become an important aim. With that they came into conflict with the increasing local population and thus drew the attention of the Byzantine tax administration, which documented the ensuing legal struggles for land between religious and non-religious communities. Michel Kaplan describes the huge efforts undertaken by monasteries and villages alike to claim rights to uncultivated land in his article The Monasteries of Athos and Chalkidiki (8th-11th Centuries): A Pioneering Front?

The terms and categories employed in the investigation of religious communities should not be used without being aware of the origins which shaped their meanings and connotations, suggests Albrecht Diem. So, calling Buddhist religious institutions “monasteries” might uncritically introduce specific associations into a study, blurring our view of religious practices and motivations. Under that premise the author explores The Limitations of Asceticism in a threefold approach by outlining the roots and history of the terms asceticism, Askese, ascétime; by tracing the origins of the term ‘askēsis’ in Greek monastic discourse and by describing the transformations of religious ‘ascetic’ practices in a number of Latin hagiographic and normative texts.

Our cluster Byzantine Connections exemplifies the many ways in which the cultural, commercial and religious influence of Byzantium on other regions and cultures can be traced. Thus records of an Italian church archive, a foundation inscription in an Italian Church or even travel reports about Attila or later about the Mongol empire might be just as illuminating as church records of the Patriarchate of Constantinople. In his article Greeks and “Greek” Writers in the Early Medieval Italian Papyri Edward M. Schoolman examines Latin papyri from the sixth and seventh centuries, which were originally part of the church archive of Ravenna. They witness the use of Greek language, Greek script or the term grecus in the preparation of legal documents such as donation charters or bills of sale. In a close reading of these sources the author considers what such a significant choice might have meant for the person initiating the bill or charter and the people around them in the context of early Byzantine Italy and explores individual and micropolitical reasons behind it. Resenting Byzantine Iconoclasm offers a very careful reading of another early medieval source: an inscription celebrating the foundation of a church by the Lombard king Liutprand (ca. 730 CE). Its terse description of the Byzantine emperor Leo III (717-741) as being schismatic is the starting point for the authors Francesca Dell’Acqua and Clemens Gantner to thoroughly investigate its chronological and historical context, possible motivations for such a statement, contemporary evidence of the reception of Byzantine iconoclasm and the later transmission of the inscription. Thus a short epigraphical excerpt contributes through its thorough investigation to a new perspective on the early reaction of Italian regions to the rising image controversy in the east. In A Universal Narrative of Humanity Pia Carolla compares the travel reports of Priscus of Panion (5th c. CE), a historian who joined an embassy from Byzantium to Attila the Hun and William of Rubruk (13th c. CE), a Franciscan missionary who travelled via Byzantium to the Mongol Empire. Focusing on similarities between the accounts, the author presents their perceptions and descriptions of the ‘other’ as well as their perceptions of their own ‘otherness’. In these reflections Byzantium and Constantinople, respectively, were omnipresent points of reference to which both travellers were inevitably linked. The role of Byzantium as a key to other cultures is explored through very different sources in Mercantile and Religious Mobility between Byzantines, Latins and Muslims, 1200-1500. The “Register of the Patriarchate of Constantinople”, letters from a patriarch to his clergy and laymen, an account book of an anonymous Byzantine merchant, all these texts provide the basis for Johannes Preiser-Kapeller’s and Ekaterini Mitsiou’s study on commercial mobility and religious conversions in the late medieval Eastern Mediterranean along Islamic-Christian borders. By combining sociological findings with tools and concepts of network analysis the authors create riveting maps to explore the entangled border zones between east and west, visualising interconnections and leverage points for brokerage between individuals, families and groups with very different religious and political backgrounds.

We hope that this short overview of Medieval Worlds 9 has caught your interest in these and the many other contributions to the comparative study of global middle ages we share open access with our readers. For a short overview of our issues, have a look at our brochure. If you would like to browse our other issues just visit our website: http://www.medievalworlds.net.

An Old Ritual Capital, a New Ritual Landscape: Understanding the Transformation of Angkor Thom, Cambodia through the Construction and Placement of Theravāda “Buddhist Terraces”
Andrew Harris

The Monasteries of Athos and Chalkidiki (8th-11th Centuries): A Pioneering Front?
Michel Kaplan

The Limitations of Asceticism
Albrecht Diem

Resenting Byzantine Iconoclasm. Its Early Reception in Italy through an Inscription from Corteolona
Francesca Dell’Acqua and Clemens Gantner

Mercantile and Religious Mobility between Byzantines, Latins and Muslims, 1200-1500: On the Theory and Practice of Social Networks
Johannes Preiser-Kapeller and Ekaterini Mitsiou

“A Universal Narrative of Humanity”. Travelling to the ‘Other’ from Constantinople: Priscus of Panion (5th c. CE) and William of Rubruk (13th c. CE)
Pia Carolla