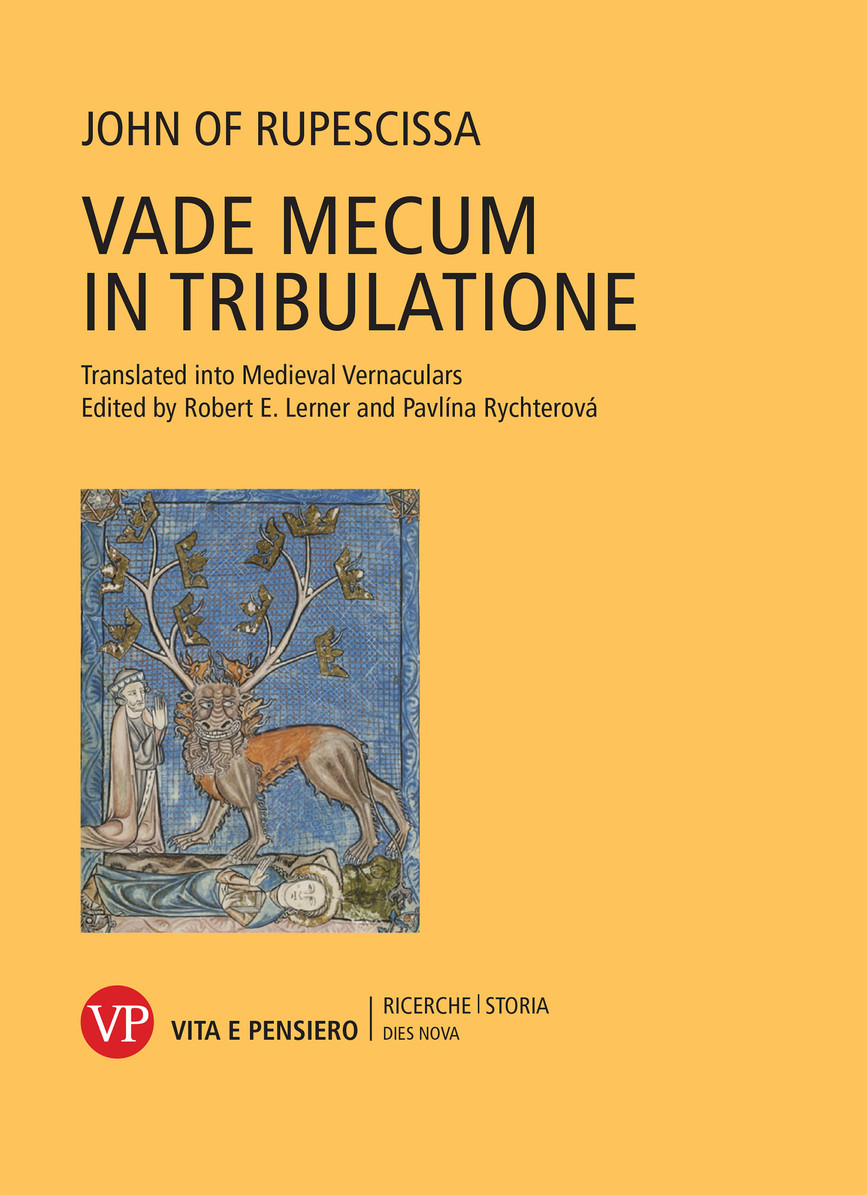 The Vade mecum in tribulatione, written by the Franciscan John of Rupescissa in 1356 while he was in captivity in Avignon was one of the most popular of all late-medieval prophetic works. The collective monograph presented here was written by an international team of philologists and historians and consists of analyses and editions of sixteen translations (some complete and many partial) of Rupescissa’s Vade mecum in seven medieval vernaculars and represents the first enterprise of this type. Of the sixteen translations, four are in French, three in German, three in Czech, three in Castilian, and one each in Italian, English and Catalan. Rupescissa castigated abuses perpetrated by both the clergy and lay lords, specified frightful chastisements to occur in specific years, and foretold the subsequent purification of the world and millennial peace. The reception of Rupescissa’s treatise by different types of readers in territories as far-flung as England, Bohemia, Italy and Spain exhibits a variety of ways in which it was understood and appropriated.

The book has been long in the making. Its origins date back to annual gatherings of an international group of scholars working on late-medieval prophetic texts who met in Modena in 2008, Budapest in 2009, Prague in 2010, and Vienna in 2011 to deliver papers and discuss each other’s work.  At the Vienna meeting the participants decided to aim for the publication of a volume that would present editions of all the vernacular translations of the Vade mecum in tribulatione. The idea was to produce a rich resource for studying and comparing the choices and strategies, linguistic and ideological that inhered in the translation and reception of a daring Latin work, the critical edition of which at that time being made by a member of the group (Giovanni di Rupescissa, Vade mecum in tribulatione. Edizione critica a cura di E. Tealdi. Introduzione storica di R. E. Lerner e G. L. Potestà, Vita e Pensiero, Milano 2015). Once these goals were set, a group of contributors responsible for producing the editions and analyses of the late-medieval translations of Rupescissa’s Vade mecum met together three times: in Vienna (2012), Prague (2013), and Vienna again (2015), and step by step built a joint interpretation of the individual translations, which had been either completely unknown till then or have received only minimal attention in the scholarship and without regard for the complex contexts of European reception.

Rupescissa’s Vade mecum in tribulatione was the most widely copied eschatological-prophetic text of the Middle Ages written by a verifiable author. At present we know of forty-three copies of complete or abbreviated Latin versions. Documented evidence exists for several others. And to these must be added copies in a large number of vernacular translations. Putting aside the Hebrew, which can only be inferred, we know of four different versions in French, three in German, three in Czech, three in Castilian, one of them written in Arabic characters, and single ones respectively in Italian, English and Catalan. Given that in some instances more than one copy survives of a given translation, the present number adds up to twenty-one copies. To appreciate the unusual extent of these occurrences, it may be noted that the number of different languages rivals that of three of the most popular devotional works of the later Middle Ages, the Speculum humane salvationis, with five languages; the Meditationes vite Christi, with seven languages; and Heinrich Suso’s Horologium sapientie, with eight languages.

Why was the Vade mecum translated so often? Latin copies were available throughout western Europe and readers were evidently struck by its enormous punch. Written in forceful language and of manageable length, the treatise proclaimed frightful imminent chastisement but ultimate hope. In effect its title meant “go with me in tribulation and if you do you will emerge safely.” It predicted: the onslaught of unbelievers, uprisings, floods, famines, and earthquakes, punishment of the clergy, endemic wars in many regions, the appearance of a holy “restorer” (reparator), the appearance of the Antichrist, and the advent of a new millennium. Different translators responded to some of these aspects differently, most making excisions, adjustments, or amplifications, for medieval translators generally felt much freer to tamper with what lay before them than Latin copyists did. The most important feature of the text, crucial for the reception, was its flexibility – individual elements could be used together or alone or combined with elements from other texts, to deliver the interpretation of events experienced by the particular readership who then did not feel more confident and secure, but it let the world make sense to them again. And there is nothing more important than that.