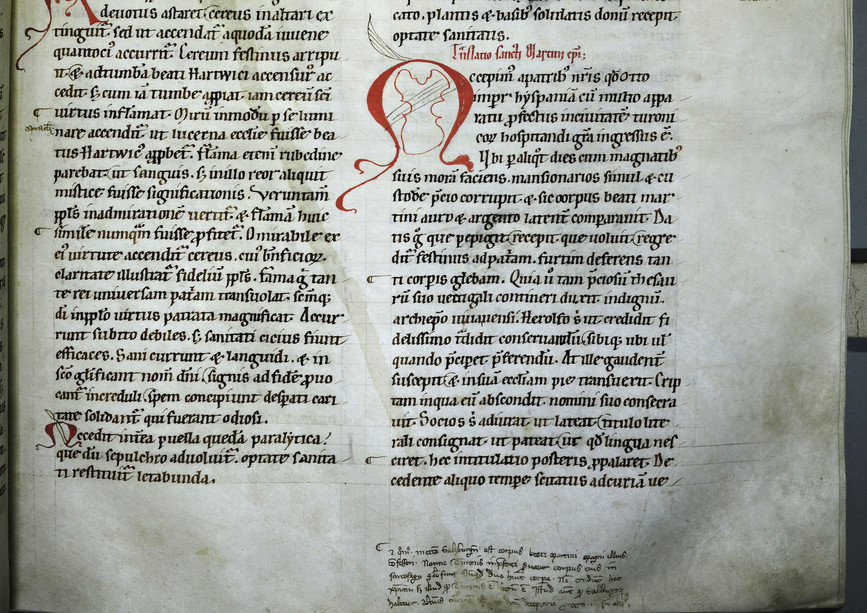 It will come as a surprise to many that Martin of Tours, the late antique confessor saint immortalised in Sulpicius Severus’ Life, is buried not on the Loire in France but rather on the Salzach in Austria. According to a short text, that is, which was written at the archiepiscopal see of Salzburg in the high medieval period. The Translatio sancti Martini episcopi ad Iuvavum (BHL 5659) explains how the body of the famous saint came to end up in the cathedral at Salzburg. It is a tale that belongs to that sub-set of translation narratives dealing with so-called furta sacra, thefts of the corpses or relics of saints. The best-known representatives of this curious hagiographical genre include Einhard’s account of the removal of the remains of the martyrs Marcellinus and Petrus from Rome to Seligenstadt and the story of Venetian merchants’ theft of the body of St Mark from Alexandria. Despite the prominence of the saint involved, the tale of Martin’s translation to Salzburg is, on the other hand, little known. This may be due to the apparent failure of knowledge and/or acceptance of the legend to extend beyond a confined region around Salzburg in the medieval period. All 12 surviving manuscript witnesses of the Translatio, which date to between the late 12th and mid-16th century, come from Bavaria, Styria or Austria. Not even the legend’s incorporation into the Magnum Legendarium Austriacum, the largest collection of hagiographical texts compiled in the high Middle Ages, could serve as a springboard to a wider transmission. Although belief in the presence of Martin at Salzburg would persist locally into the early modern period, the medieval attempts to establish this legend concerning a universally venerated saint can ultimately be regarded as something of a failure.

Turning to the narrative of the Translatio, the plot begins with Emperor Otto (I) stopping off at Tours on his way to Spain. There he acquires the body of St Martin after bribing its custodian. Quickly departing, he secretly transports the precious treasure homewards, before entrusting it to Archbishop Herold of Salzburg. Herold inters the body in the crypt of the cathedral, which is rededicated in Martin’s honour. Subsequently appearing at court, Herold refuses to return the body to Otto. In order to placate the irate emperor, his brother Heinrich and others capture and blind the Archbishop. After Herold’s death, Martin’s body is said to have lain hidden until the time of Archbishop Hartwig (991–1023), who found it by means unknown to the author and reburied him in a single tomb with St Rupert, “the apostle of Bavaria”. There follows an account of a council at Regensburg presided over by Emperor Heinrich IV, which happened to fall on Martin’s feastday and where a dispute arises between Archbishops Gebhard of Salzburg and Adalbert of Bremen as to who should celebrate mass. In part because of the presence of the body of Martin at Salzburg, it is Gebhard that is given the honour.

Considering that there is no record of the legend before the late 12th century and the strength of the tradition of Tours as the resting-place of Martin, it is safe to assume that the text does not depict events that actually took place in the 10th century, the time of Emperor Otto I (reg. 936–973) and Archbishop Herold (ep. 938–c. 955/970), or at any other stage. That said, the author chose the two protagonists of his tale well, considering that Herold was indeed captured and blinded in the course of a conflict with Otto I and his brother, Heinrich, duke of Bavaria. But the cause of this strife was not relic-theft but rather Herold’s participation in a rebellion led by Otto’s son Liudolf and members of Herold’s own Liutpolding dynasty.

This was not the only dispute between an archbishop and an emperor that the anonymous author of the Translatio had in mind, however. Internal evidence suggests that he was writing in the final third of the 12th century, a period marked by prolonged conflict between successive Salzburg archbishops, supporters of Pope Alexander III, and Emperor Friedrich Barbarossa. This hostility reached a highpoint in 1167 with the burning down of Salzburg cathedral by forces loyal to Friedrich. Those primarily implicated in this act were the counts of Plain, a local noble family that first appears in the historical record around 1100. In what must surely be a reference to the 12th-century conflict, the author of the Translatio, who was probably a cathedral canon at Salzburg, states that Duke Heinrich was assisted by certain knights of Plain (milites plagenses) in his capture of Archbishop Herold. This allows us to date the Translatio with some confidence to the period after 1167. Indeed, the translation first appears in manuscripts together with a group of Salzburg saints’ Lives written shortly after the consecration of the new cathedral in 1181. It may well be that the Translatio was written to promote the development of a new cult at the rebuilt cathedral.

A local precedent for the translation story can be found in the fictitious 11th-century account of the theft of the body of St Dionysius the Areopagite from the abbey of Saint- Denis outside Paris and its translation to St. Emmeram’s abbey in Regensburg. Here, it is again an emperor, this time Arnulf of Carinthia, who is said to have acquired the body of Dionysius in France and brought it to Regensburg. Given the shared plot of an emperor stealing the body of a celebrated saint in France and transferring it back to Bavaria, it is quite possible that the Regensburg legend inspired the Salzburg one. The additional twist in the Salzburg tale, the defrauding of the emperor, may reflect the particular political climate in late 12th-century Salzburg, as I have argued above.

A limited number of sources provide evidence for the continued promotion of this particular cult at Salzburg cathedral in the later medieval period. A charter issued by Pope Clement VI in 1344, for example, granted indulgences to those who visited Salzburg on the feastdays of those saints buried there, namely Rupert, Virgilius and Martin. Indeed, remains of Martin had been found in magna quantitate when the tomb of St Rupert was opened by Archbishop Weichard in 1315. An extant baptismal font dating to 1321 duly shows Martin alongside other Salzburg saints. Yet there is also contemporary evidence of doubt as to the veracity of the legend. Pope Clement included the qualification “as is claimed” (ut asseritur) with regard to the presence of Martin at Salzburg, and Ambrosius of Heiligenkreuz added the following remark in the margin of his monastery’s copy of the Translatio c. 1300:

And how is the body of that great confessor Martin in the church
of Salzburg? Is his body not at present preserved at Tours in a
glorious sarcophagus? Surely he didn’t have two bodies ...

Although the idea of Martin’s burial at Salzburg would be defended by local chroniclers into the 17th century, the author of the 12th-century Translatio had invented a story about a universally revered saint that was perhaps too far-fetched to convince an outside audience.

The Translatio Martini on the Magnum Legendarium Austriacum website