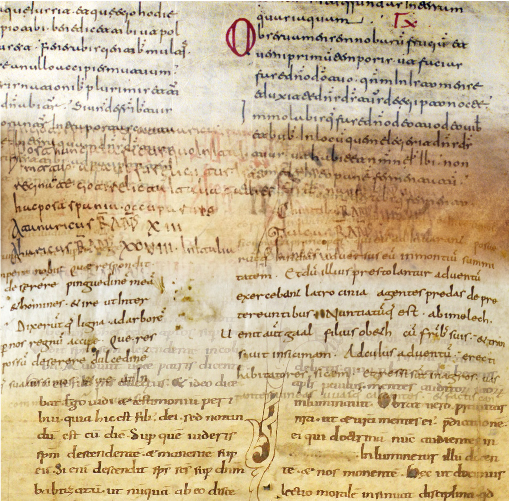 The introduction of a reformed Latin writing style (“Caroline minuscule”) in the various cultural centres of Charlemagne’s Empire since the later eighth century is a classical research topic of Early Medieval Studies which has been especially fostered by the Munich palaeographical school of Bernhard Bischoff (1906–1991) and his pupils and followers. This research was based on in-depth manuscript research of central ‘German’ and ‘French’ scriptoria such as St. Emmeram, Freising and Salzburg (Bavaria), Reichenau and St. Gallen (Alemannia), or Fulda and Lorsch (Hessia) in the eastern part of the new Empire, and Corbie, Saint-Amand, Saint-Denis, Reims, Soissons, Tours and Fleury among others in the northern regions of the western part of the Carolingian realm. Also centres of Carolingian writing culture in northern and central Italy such as Verona, Nonantola, Farfa and Rome were in the focus of Bischoff’s studies on ninth-century manuscript culture.
The more we reach out for the cultural centres of the southern and south-western shores of the Empire with its peripheries in southern Burgundy, Aquitania, Septimania and the so-called ‘Spanish March’ (‘Catalonia’), the more imprecise is at present our knowledge of the writing styles of their scriptoria and their transformative power on the regional practices of writing pre-Carolingian scriptures such as the ‘Merovingian’ and ‘Visigothic’ minuscules. My Vienna seminary will give a first concise overview of the slow, but concerted Carolingian transformation of Visigothic Septimania and Catalonia in the mirror of selected key manuscripts of the ninth to eleventh centuries in order to show how Carolingian writing culture between Aniane, Narbonne, Girona, Urgell, Ripoll, Vic and Barcelona changed the palaeographical and codicological landscape of a still underrated cultural and political ‘periphery’ of the Carolingian World.

Depending on the participants, the seminar will be held either in English or German.