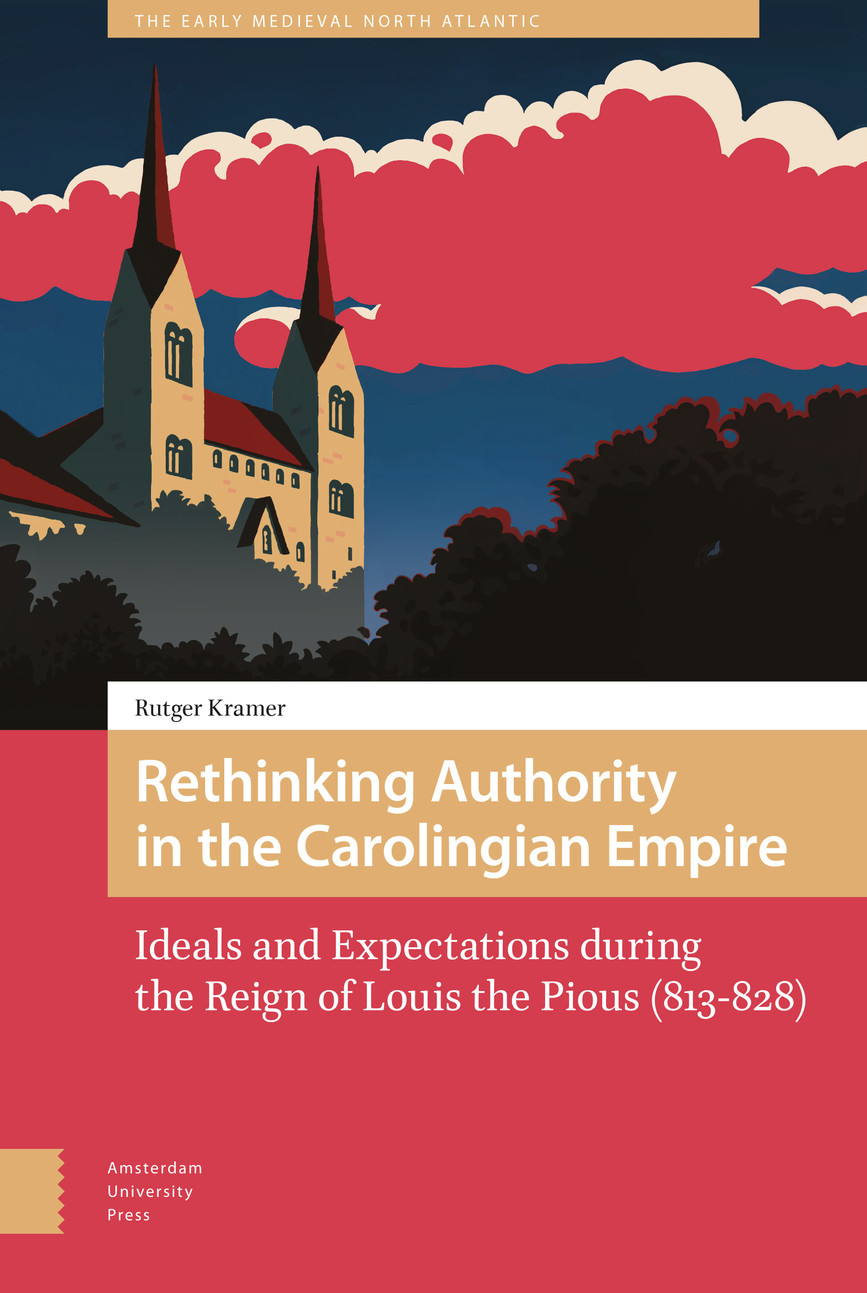 This is a book about religious reforms. Or rather, it is a book about expressing the will and the need for reforms. But it is also a book about the way people discussed such reforms, and how that discussion shaped the way these reforms were interpreted and applied.

So why does the word "reform" not occur in the title?

Picking a title is a challenging task. It is a careful balancing act between content and commerce, between being witty and being accurate. After all, the title of the book provides a service to readers, to librarians and archivists, and indeed to the publisher looking to market the book. The title I had originally chosen for the dissertation upon which my book is based, Great Expectations: Imperial Ideologies and Ecclesiastical Reforms from Charlemagne to Louis the Pious, 813-822, had to go for the rather obvious reason that another book with a very similar title already existed, and also because for reasons of space I cut out most of the case studies dealing with Charlemagne. So what used to be a dissertation about the way the discourse about religious reform under Charlemagne (r. 768-814) set the stage for the first decade of the reign of Louis the Pious, had now become a book about the way Louis the Pious (r. 814-840) and his court would attempt to live up to the expectations created by their predecessors, and continue ongoing policies while at the same time giving their own spin to it. And so, about two dozen emails with the wonderfully helpful people at Amsterdam University Press later, we settled on a title that had all the right keywords and gave a fair impression of what you could hope to find between the covers. Without, that is, including what would seem to be one of the most crucial terms.

Reform is a tricky subject to study, and it has over the past decades been re-assessed from various angles. From Julia Barrow's forays into the vocabulary used for "reform" in early medieval sources, to Alexandra Walsham pointing out the problems appearing between "reform", "change" and "modern historiography", medieval historians have increasingly moved away from the question what reform actually is to questioning whether it is even a usable hermeneutic tool to begin with when studying changes to the religious landscape. Given that the Carolingian world has been all but defined by a constant need to improve the state of the Church, this is a question I needed to ask myself too when rewriting and updating my dissertation. Gone are the days when imperial councils or capitularies were seen as prescriptive and definitive statements – a call for collective change from the top down. Gone, also, is the time when tracing monastic reforms was a relatively straightforward matter of figuring out when the Rule of Saint Benedict was introduced into a community, and explaining that in terms of adherence or opposition to a centralized reform movement. Instead, present-day researchers attempt to explain religious changes by linking local contexts to imperial interests. They give equal weight to bottom-up initiatives and top-down responses and take into account the authors and designers of the texts at our disposal rather than just the information they contain. Most of all, however, it is increasingly acknowledged that the need for reform, for improvement, for change was seen as necessary by everybody with a stake in the Church – and that meant, in theory at least, every Christian hoping to attain salvation. As much as the Carolingian court intellectuals liked to present the Church as a collective, reaching Heaven was, in the end, a personal matter. And so, paradoxically, the idea that everybody had just one life to live correctly made it important for everybody to set out on their own "king's highway" to Heaven. They would be guided by their shepherds, of course, but they were also more preoccupied with their eschatological responsibilities than with a need for total control over the lives of the faithful. Priests, bishops and abbots, in other words, were tasked with keeping everybody on the straight and narrow, but they were aware that this need not be the same "straight and narrow" for every individual. More importantly, they needed to walk this path themselves as well.

This vision of a mutually supportive ecclesiastical community might have worked in theory, but Carolingian society remained strictly hierarchical, patriarchal and authoritative. Nonetheless, it is difficult to ascertain if this sense of mutual obligations goes hidden underneath an imperialist mindset, or if the unified (but not uniform) Church actually was what allowed the Empire to persist in the first place. My aim while writing this book was to contribute to this particular way of studying reforms, as a dynamic interlocking of various stakes and interests confronting the elites tasked with shaping and consolidating the various visions of community they encountered. This means, inadvertently, that it is not about reforms anymore, but about the people who had to deal with the changes they saw around them.

Because my preferred way of dealing with the sources boils down to a close, contextual reading of individual texts, it ruled out a big synthesis more or less from the get-go. This is why I opted to present three case-studies instead, which has the advantage of working from a limited source corpus without losing sight of the broader context. Doing so thus highlighted the various angles from which "reformers" could approach the willingness to "improve" that had become part of the ideological framework of the Carolingian Empire. The first re-assesses the texts surrounding a series of councils organized, first, around the Empire in 813, and then at the palace in Aachen in 816-9. These capitularies have been extensively studied for the stipulations contained within them, and seen as attempts to implement new policies at a regional level. My approach, conversely, argues that the authors for these texts were aware that this was not meant to be the last word on anything, but that they were formulating proposals to retain the momentum for the improvement movement kickstarted by Charlemagne. The prologues of the councils of 813 and 816 especially highlight their discursive nature. In the eyes of the bishops and abbots involved in their composition, these were texts carrying the intention to reform to the court as much as they were prescriptive documents to obey (or not). The point of writing them down, it appears, was to provide a solid basis for the next round of debates, so that everybody could learn from them just as they had learned from the generations that preceded them.

While these texts still focus on the "collective" aspects of "church reform", my second case study shows that at least one participant in these debates saw them as an opportunity for personal improvement as well. This was Smaragdus of Saint-Mihiel (fl. 805-840), theologian, abbot, politician and reformer of monks and kings alike. From among the many works he wrote, I have focused on the three that most clearly address the way collective reforms impinged upon the individual: the Expositio in Regulam S. Benedicti (Explanation of the Rule of Benedict), the Diadema Monachorum (Crown of Monks), and the Via Regia (King's Highway). The first is a series of reflections on the Rule of Benedict, intended to help monks think about Who They Are and What They Should Do. The second almost reads like an appendix to the Rule itself, drawing upon a wide range of patristic writings to aid monks in internalizing the monastic mindset to the point where every waking hour is spent in an almost continuous state of prayer. Finally, Smaragdus' description of the King's Highway looks like a so-called "Mirror for Princes", but actually is more like a handbook for Christians regardless of their status. Rather than dwell on the burdens of royal authority, this book actually explains how every believer carries responsibility for every believer to whom they can be an example. Moreover, the fact that the image of the via regia is actually dispersed throughout the other two works as well makes it seem as if these were indeed part of a single oeuvre, meant to reflect on what Smaragdus considered to be  "perfect" Christians: good kings, and good monks. These were reforming texts alright, but only to the extent that they took the impetus provided by the courtly initiatives by Charlemagne, Louis the Pious and their respective entourages, and turned them into guide books for the King's Highway – showing, in the end, that the more things change, the more they stay the same.

Change is also one of the central themes of the third case study, on the life and the vita of Benedict of Aniane (c. 750-822). This was not because the changes this "second Benedict" supposedly set in motion; most of the credit he received for having single-handedly reformed the life monastic in the Empire of Louis the Pious is based on an all-too literal reading of his hagiography, written shortly after his death by his pupil Ardo. Rather, the story told by Ardo is one of personal change, where Benedict learns to become a perfect monk so that he is strong enough to weather the temptations and vicissitudes of courtly life. It is this "hero's journey", rather than the reforms he effectuated, that forms the core of the Vita Benedicti Anianensis. Benedict of Aniane starts out as one among many aristocrats at the Carolingian court. Through his asceticism and discipline, he gains credibility and respectability to the point that he becomes a voice to be reckoned with. In so doing – and in writing a number of well-known commentaries on the Rule – this "second Benedict" definitely made his mark on the Carolingian Church. But more importantly, his hagiographer highlighted him even further, ensuring that Benedict became an individual in a process that actually was a collective movement.

While each case study is definitively set in the time and context of what is usually seen as the Carolingian Reform Movement, the main concern of these authors is not the changes brought to the fabric of the ecclesia per se, but rather the place of the individual within it. As the Carolingian Empire grew, and its court grew more (self-)confident alongside it, the scale at which change was seen to occur also increased – prompting leading intellectuals to wonder how these initiatives related to the notion that faith and salvation were matters of personal responsibility. My book takes place at the intersection between these levels of community: the ideals formulated by the (intellectual) elites, the expectations subsequently raised, and the ideals that were reformulated as people tried to cope with these expectations, and so on. Rethinking authority, to these Carolingian writers, was to engage with those in power, and to try to make themselves change for the better. This could not be done in isolation: everybody could become an example to anybody else. Reform, in the classical, institutional sense, hardly seems to matter, but rethinking one's priorities does: only rarely do the sources explicitly refer to the proactive pursuit of "change" within the Church. As to the question of who has, or has been granted, the authority to make a change, the answer, as far as my three cases are concerned, may well have been ‘everybody’. Perhaps the most remarkable thing about these texts was that their writers were not trying to change the world: they were trying to change themselves.

Rutger Kramer, Rethinking Authority in the Carolingian Empire. Ideals and Expectations during the Reign of Louis the Pious (813-828) (Amsterdam: Amsterdam University Press, 2019).