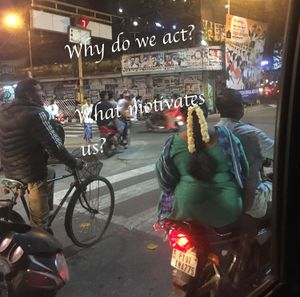 The Vidhiviveka of Maṇḍana (8th c. CE) is a key text for the theory of injunctions in Mīmāṃsā and in South Asian thought in general. In it, Maṇḍana explains that prescriptions are nothing but statements describing a state of affairs, namely the fact that the action prescribed is the means to attain a result the addressee covets. Maṇḍana explains how this works also in the case of orders and prohibitions.

The aim of this workshop is to finalize the critical edition and translation of the main section of the Vidhiviveka (section 8 in Elliot Stern's ongoing edition), integrating philological and philosophical research on the topic of injunctions.

The section we will examine constitutes the beginning of Maṇḍana's answer to the long presentation of the prima facie view (mahāpūrvapakṣa). It starts with a short explanation of Maṇḍana's main thesis about the fact that one acts because the action enjoined is the instrument to a coveted result (iṣṭābhyupāyatā). Then, the main objector speaks and suggests that, instead, what motivates one is the feeling that something has to be done. A sub-version of this theory states that this feeling that something has to be done is eminently linguistic in nature (pratibhā). Maṇḍana disagrees since the feeling that something ought to be done needs to have a support (ālambana) and this support is the only real motivator. A long excursus on Vedāntic sentences follows, since these seem to communicate non-deontic meanings. Next, Maṇḍana explains why the objectors are wrong unless integrated in his own point of view. The understanding that something has to be done, in other words, must have a support (ālambana) and this can only be the iṣṭābhyupāyatā.

Some examples of open questions

The following are some of the questions we would like to address in the workshop, both in its reading part and in the concluding days:

1. If the iṣṭābhyupāyatā is the only motivator, why do we have to continue performing fixed sacrifices, no matter what we presently desire? Maṇḍana's solution is that the result one obtains from them (i.e., elimination of accumulated negative karman) is too big not to be wished. Is this only an ad hoc solution?

2. Maṇḍana's role within Vedānta: The section on Vedāntic sentences is disproportionately long if one thinks of the reason which occasioned it (i.e., the meaning of non-deontic sentences). The section then ends with a discussion of the purely Vedāntic topic of akhaṇḍavākyārthavāda. Is Maṇḍana building a bridge through the iṣṭābhyupāyatā towards the validity of the Upaniṣads? Moreover, Maṇḍana analyses several theories about the signification of Upaniṣadic sentences (ranging from their prescribing the knowledge of the ātman to their prescribing mokṣa or to their describing the svarūpa of the ātmatattva). Who authored them?

3. What is the role of Bhartṛhari within South Asian deontics? Is the pratibhā theory a deontic theory or only a theory of cognition in general as eminently linguistic?

4. Why does not Maṇḍana refute Kumārila at the beginning of his siddhānta (after having mentioned his theory in the mahāpūrvapakṣa, vv. 3–4)? Does he consider his theory to be akin to Kumārila's?

5. Does Maṇḍana want to say that Prabhākara's theory is acceptable, provided it takes the iṣṭābhyupāyatā as the ālambana for the understanding that something has to be done?

6. Does Maṇḍana accept the theory of bhāvanās from previous lifes in order to explain the functioning of iṣṭābhyupāyatā in young children (and animals)? If so, why should the arguments against śabdabhāvanā discussed with regard to kartavyatā in section 8.9 not apply with regard to iṣṭābhyupāyatā?

Please register per email to elisa.freschi(at)oeaw.ac.at before 30 June 2019.