The President of the EU Commission was a guest at the Institute for Quantum Optics and Quantum Information of the Academy in Vienna. Research projects supported by the EU's corona development fund are being carried out there.

EU Commission President Ursula von der Leyen, Chancellor Sebastian Kurz, and OeAW President Anton Zeilinger in a laboratory at the Academy in which experiments on quantum physical entanglement are carried out. © Roland Schlager/APA/picturedesk.com

Austria may be a comparatively small country, but it is definitely one of the big fish when it comes to international quantum research. Quantum research at the Austrian Academy of Sciences (OeAW) with its institutes in Innsbruck and Vienna has made a significant contribution to establishing Austria among the global leaders. In recognition of this success, Ursula von der Leyen, President of the Commission of the European Union, also made a stop at the OeAW during her visit to Vienna.

Greeted by Academy President and quantum physicist Anton Zeilinger and Institute Director Markus Aspelmeyer, von der Leyen was able to gain an insight into the work of the scientists there during a guided tour through the institute building in Vienna's Boltzmanngasse. Chancellor Sebastian Kurz, Science Minister Heinz Faßmann, Rector of the University of Vienna Heinz Engl, Managing Director of the FFG Henrietta Egerth, and President of the FWF Christof Gattringer were also guests at the OeAW Institute. The quantum physicist Rainer Blatt joined from the Institute for Quantum Optics and Quantum Information in Innsbruck, where he is scientific director.

The Institute for Quantum Optics and Quantum Information was founded by the OeAW in 2003 with locations in Vienna and Innsbruck. Since then, in close cooperation with the Universities of Vienna and Innsbruck, new groundbreaking contributions to fundamental questions and technological applications of quantum physics have been made continuously. Examples are the world's first proposals and implementations of quantum gates as elementary building blocks of the quantum computer, the first quantum teleportation and communication over more than 100 kilometers, and the first demonstrations of novel quantum states of light and matter. In parallel to the basic research, several company spin-offs for the use of quantum technologies have now emerged.

A highlight of the visit by the high-ranking delegation was the Hedy Lamarr telescope on the roof of the institute building in Vienna. It was put into operation in 2013 by the OeAW and the University of Vienna and dedicated to the famous Austrian Hollywood actress and inventor Hedy Lamarr. Lamarr played a key role in the development of frequency-hopping spread spectrum communication, which still plays a central role in mobile phone technology today. The telescope is used to research new communication methods based on quantum physics. Incidentally, it is used to prominent visitors. Anthony Loder, Hedy Lamarr's son, personally inspected the telescope not so long ago.

Ursula von der Leyen is currently touring Europe and visiting the individual member states to discuss the corona development program "Next Generation EU" – which is endowed with a total of around 800 billion euros – with the respective heads of state. A significant part of the around 3.5 billion euros that Austria is to receive from the EU development fund is to flow into research, including the "Quantum Austria" funding program. It aims to finance basic research projects as well as application-oriented research. In any case, von der Leyen was "impressed" after her tour of the OeAW, reinforcing Austria's place as a world leader in the field of quantum communication.

Pictures: HEDY Lamarr telescope and quantum reasearch at the OeAW 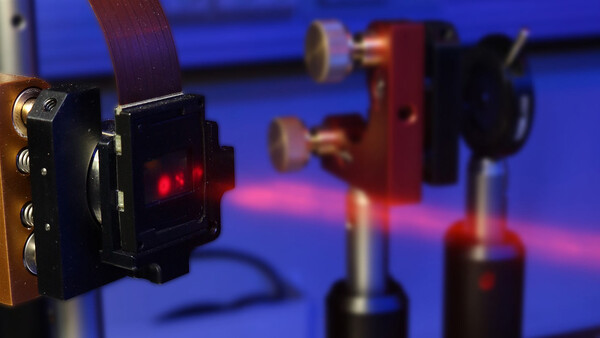