Science and politics should create better awareness of the opportunities and risks of rapid digital development. After all, if you have digital skills, digitization is not a threat to you. This was the conclusion of members of parliament and researchers who met to discuss the topic at the invitation of the National Council and the OeAW. 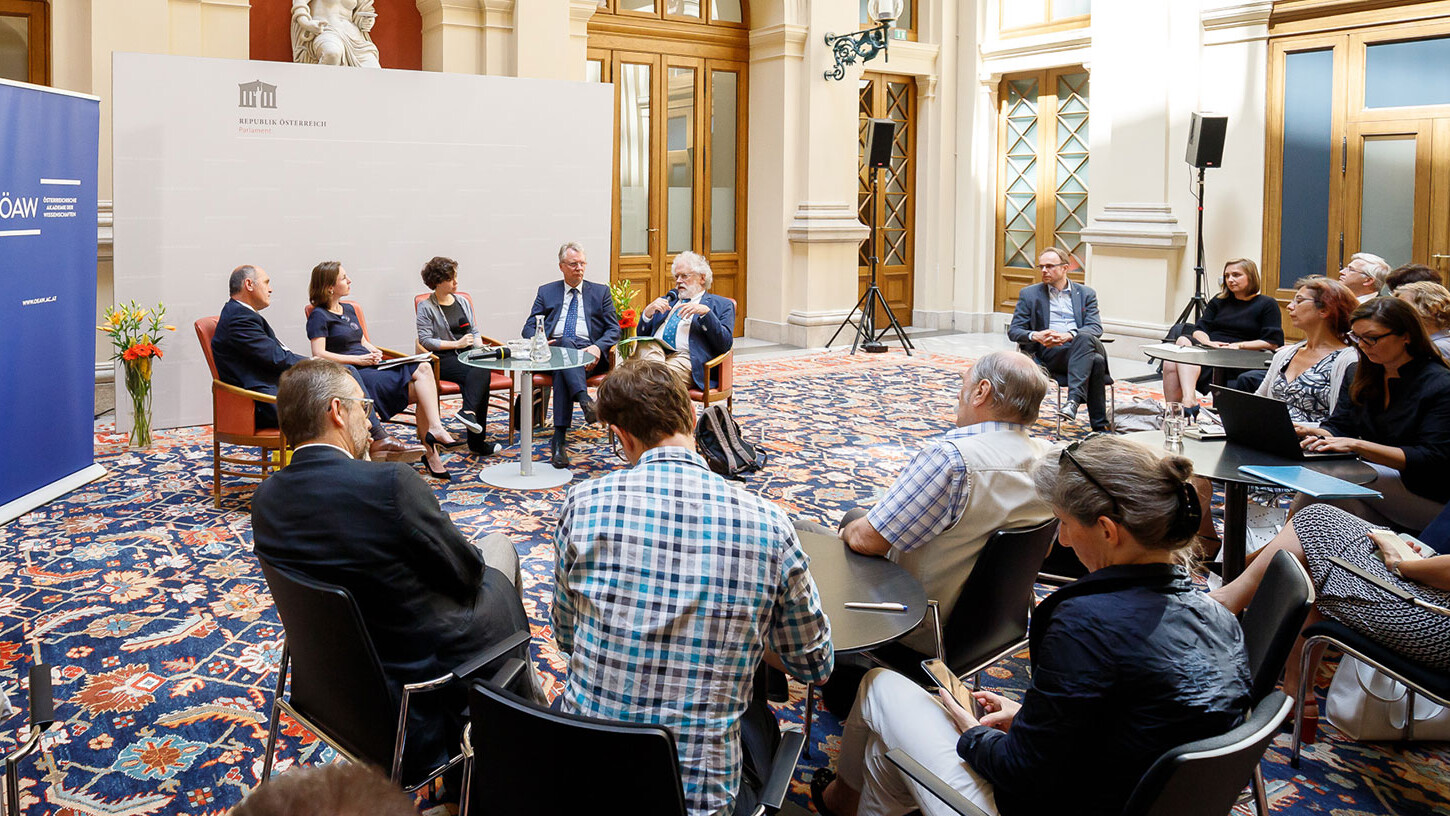 During the dialogue format "Science and Politics in Conversation" (Wissenschaft und Politik im Gespräch) between the National Council and the Austrian Academy of Sciences, scientists and parliamentarians advocated for a "European way" to deal with digitalization and data. The participants agreed that the problematic approaches of the US on the one hand and China on the other hand should be avoided.

For the second time since the launch event last year, researchers and members of parliament from several political groups met at the invitation of the President of the National Council, Wolfgang Sobotka, and Academy President Anton Zeilinger for a direct exchange at the Palais Epstein in Vienna. This time, the focus of discussion was digitalization and its impact on various aspects of daily life, such as health, privacy and education.

Especially in education, digital literacy has long since become an indispensable cultural skill, as highlighted in a press conference following the exchange between scientists and politicians. Young people in particular produce extensive data through online activities, which can then be accessed by tech giants. How to handle your own data must be covered in school lessons as quickly and systematically as possible, Sobotka said. It was important to teach students what happens to their data.

The President of the National Council also referred to a phenomenon that political scientist Barbara Prainsack called "datafication". This refers to the fact that, today, data are recorded in areas where it was previously inconceivable – for example, when the smartphone logs a walk around the block or fitness trackers continuously record health data. This leads to a "decline in privacy," which in turn can trigger "diffuse fears", according to the professor at the University of Vienna.

The fact that people play along does not mean that they welcome this practice, explained Prainsack. The reason is rather resignation. For example, if a WhatsApp group concerns a child's school class, parents often have no choice but to join the group if they want to be kept informed. And they do so knowing that their personal data may end up in the hands of profit-oriented companies.

Nevertheless, digitalization is not a general danger. The task of science and politics must be to create an awareness of the risks as well as the opportunities "based on the current state of research", stressed Anton Zeilinger. That is exactly why lively exchange between science and politics is so important. The fact that such exchange, based on models like the European Commission's "Science meets Parliaments", now also takes place regularly and at a personal level in Austria, is a progress that was very much welcomed by the OeAW president.

This was also agreed by Christoph Meinel, director of the Hasso Plattner Institute for Digital Engineering in Potsdam. Because, according to the German digital expert, "regulation requires understanding". In addition, rapid technological progress often leads to regulations being quickly outdated. He therefore wants "a kind of expiration date" for regulations. Thus, after a certain period of time, it will be possible to check, with the help of science, whether a legal measure is still up to date and has achieved the desired effect.

It is important that the citizens are the focus of all legal measures. A "wild-west approach" (Barbara Prainsack), as in the US, where there is hardly any regulation, is therefore just as undesirable for Europe as China's path, with its combination of private-sector technology development and state surveillance, the panel agreed.

The dialogue format "Science and Politics in Conversation" brings together members of parliament and researchers for face-to-face discussions at the invitation of the Austrian Parliament and the OeAW. The goal is to provide politics with established, reliable knowledge as a basis for decision-making. After the launch in November 2018, the second event of the series, on digitalization, took place on 18 June.

After a 'science breakfast' for members of parliament and researchers, President of the National Council Wolfgang Sobotka, Academy President Anton Zeilinger, Barbara Prainsack from the University of Vienna and Christoph Meinel from the Hasso Plattner Institute commented on current digitalization issues at a press conference. The final event was a public talk by Christoph Meinel entitled "Digital Transformation – Shaping the Future" in the festive hall of the OeAW.