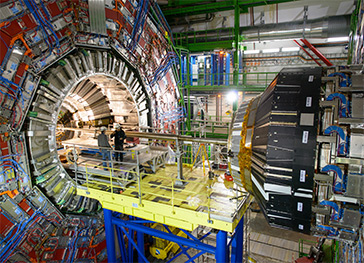 Since last Wednesday Vienna is marked by pentaquarks, neutrinos, Higgs bosons and the like. Over 700 international physicists are discussing the newest results in their field at one of the world’s most important conferences on particle physics. The conference is organized by the European Physical Society, the Institute for High Energy Physics and the Stefan-Meyer Institute of the Austrian Academy of Sciences, the Technical University of Vienna and the University of Vienna and is centered around the eagerly expected results from the experiments at the Large Hadron Collider (LHC) at CERN, which have recently taken up operation again. At a press conference held on July 27, 2015, CERN’s director general Rolf Heuer already presented news on pentaquarks, which were discovered only a few days before. The preliminary assessment of the experimental investigations that have just started again at CERN is very positive: “The LHC experiments have already yielded far more data than in 2010 when the LHC first started operation at high energies. We are feeling the fantastic pioneers’ spirit of the physicists who are now examining data of a completely new kind at energies never reached before“, said Heuer to representatives of the international press.

Austria has been a member of the European Organization for Nuclear Research (CERN) since 1959 and Austrian research institutions have been making important contributions to nuclear and particle physics for many years. One of the main points for Austria’s participation at CERN is the cooperation on major international experiments. The Institute of High Energy Physics of the Austrian Academy of Sciences is a founding member of the CMS experiment at CERN, which is one of the two major detectors that discovered the Higgs boson in 2012. The Stefan-Meyer Institute for Subatomic Physics of the Austrian Academy of Sciences, the Atominstitut of the Technical University of Vienna, the Institute of Theoretical Physics of the University of Vienna and five other Austrian research institutions are also working in the field of experimental and theoretical nuclear and particle physics.

The fundamental research conducted at Austrian research institutions and at CERN is not only important for science. The Austrian economy profits from the know-how on newly developed technologies as well as  from the financial backflow to Austrian companies. Moreover, the Austrian institutes for nuclear and particle physics also offer excellent training programs for undergraduate and postgraduate students. The young scientists are thus involved in international research projects from the very beginning.

One highlight of the press conference was the update given by CERN on the LHC restart. The world’s fastest and most powerful particle accelerator, which has also been dubbed a “world machine”, has been operating at almost twice its previous collision energy since it was restarted. Before the technical stop this energy was about eight teraelectronvolts, now up to 13 teraelectronvolts can be reached. Translated into temperature, this energy corresponds to a billion times the temperature in the center of the sun. The advantage of using such high energies is that the more powerful the collisions between protons are the more exotic particles that are unknown so far can appear.

Even the data from Run 1 of LHC are still full of surprises, as we have recently seen again. For a long time, since the 1960ies, scientists have been speculating about something that has now been finally observed: the "pentaquark", a conglomerate of five quarks, which constitutes a further milestone for particle physics.

"The high energies achieved by the LHC since 2015 allow physicists to step on new territory", said Rolf Heuer at the press conference. "Such energies have never been reached before", added CERN's director general.

The underground ring tunnel of the LHC at CERN near Geneva is 27 kilometers long. Two beams consisting of bunches of 100 billion protons each are accelerated almost to the speed of light in opposite directions and collide head-on in the detector centers every 50 nanoseconds. The number of bunches is being gradually increased and over the next few days the time between collisions should even be reduced to half its present value. The accelerator's ambitious target is to achieve 2000 bunches per beam by the end of the year. This will further increase the chances of finding new particles of which we do not know anything until now.

Most important prize in particle physics has been awarded

The particle physics conference, which will continue until Wednesday, is also the venue where one of the most prestigious prizes in today's physics has been awarded for the first time in Vienna: This is the "High Energy and Particle Physics" prize of the European Physical Society. Its significance is underlined by the fact that many of the winners of this prize were later awarded the Nobel prize in physics. The winners of the 2015 EPS prize are the theoretical physicists James D. Bjorken (Stanford), Guido Altarelli (Rome), Yuri L. Dokshitzer (Paris and St. Petersburg), Lev Lipatov (St. Petersburg) and Giorgio Parisi (Rome).

One of the EPS prizes, the "Giuseppe and Vanna Cocconi Prize" for outstanding achievements in the field of astrophysics has this year been awarded to Francis Halzen. Halzen is the spokesman of one of the astrophysical experiments that receive the most attention at present: this is the IceCube project, which uses a gigantic telescope in Antarctica to look for cosmic neutrinos. Halzen has been awarded the "Giuseppe and Vanna Cocconi Prize" in recognition of his vision and his leading role in the discovery of high-energy extraterrestrial neutrinos. He explained at the press conference: "The detection of very high-energy extraterrestrial neutrinos opens a new observational window on the Universe. Early results show that neutrinos reach us from sources throughout the Universe and suggest an overlap with those observed in highest energy gamma rays." Halzen's research results open up a new window in astro-particle physics and our understanding of the universe.

The particle physics of the future

Also over the next two days the universe will be the center of interest of researchers working on many other topics of present-day physics. Apart from the search for dark matter and the origin of the universe in the big bang, the higher collision energies achieved at LHC and the by now breath-taking precision of results from cosmological research yield more and more accurate information about the building blocks and the structure of the universe.

The fascinating secrets at the very root of our existence were also the topic of the joint strategic meeting of the European Physical Society and the European Committee on Future Accelerators, which took place during the conference. Researchers hold their breath while confronted with the question if there is a connection between the physics of the very small and the very big, between particle physics and cosmology, the science about the origin, the development and the basic structure of the universe. We may well expect that in future particle physics and cosmology will have even closer connections, and this will yield results for many further summit meetings on particle physics.

The world's largest conference on particle physics will be concluded on July 29 by the presentation of CERN's future director general Fabiola Gianotti. She will give an outlook on the future of particle physics and the next generation of accelerators.

The text of the press release and photographs can be downloaded from:

Information on the conference program can be found at:
http://eps-hep2015.eu/

A daily Newsletter on the conference is published at:
http://eps-hep2015.eu/news-press

The Austrian Academy of Sciences
The Austrian Academy of Sciences has by law the task to "promote science in all directions". It was founded in 1847 as a society of scholars. Now it has 770 members and about 1300 employees and stands for innovative fundamental research, interdisciplinary knowledge exchange and communication of science, and its aim is to promote progress in science and in society at large.
www.oeaw.ac.at