Not far from the Spanish coast, a Roman merchant ship lay undiscovered on the seabed for more than 2,000 years. Its cargo is now being recovered step-by-step. OeAW archaeologist Horacio Gonzalez Cesteros is delighted to find hundreds of ceramic vessels that are still sealed, revealing insights into the eating habits of the Romans. 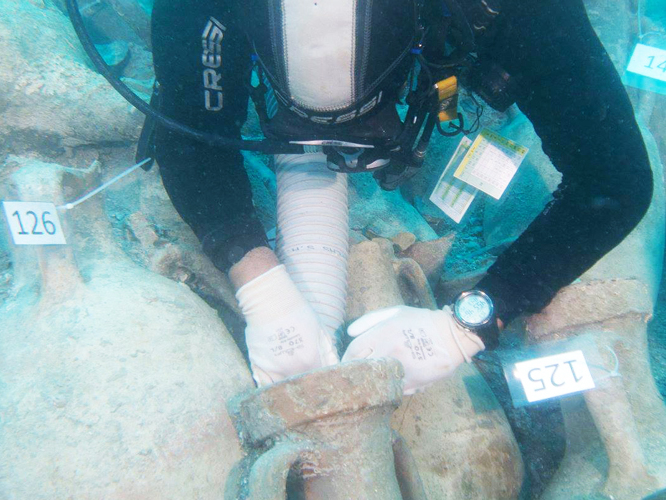 After a dive of 46 meters, you reach a ship that sank around a century before the birth of Christ on a rough stretch off Spain's Mediterranean coast. Around 1,000 amphorae or, as the archaeologist Horacio González Cesteros calls them, "time capsules" went down with the ship.

The Spaniard is a researcher at the Austrian Archaeological Institute of the Austrian Academy of Sciences (OeAW) and is an expert on ancient ceramics. He is currently investigating the amphorae discovered at the bottom of the sea and their history. He talks about the probable destination of the ship and how to examine delicate ancient containers, as well as what fish sauce according to a two thousand-year-old recipe tastes like.

For 2,050 years it lay untouched at the bottom of the sea. How was the wreck, whose cargo you are currently investigating with an international research team, discovered?

Horacio González Cesteros: The site off the coast of the Catalan province of Girona is a rough, rocky section. In the 1970s, a wreck was discovered nearby and called "Iles Formigues I". Like that find, this one was also thanks to the local fishermen, who told my colleagues that there was something else a kilometer off the coast. In 2018, divers from the Center d'Arqueologia Subaquàtica de Catalunya (CASC) discovered the amphorae at a depth of 46 meters.

How big is the ship?

González Cesteros: It is 16 to 20 meters long, six meters wide. And there are about 1,000 amphorae on board. This corresponds to a medium sized ship. It dates from the early Augustan period, that is from the late first century BC.

From what you know already, can you guess as to the destination and purpose of the ship?

González Cesteros: There are several possible destinations. Most likely, however, the cargo was destined for Arelate, today's Arles in southern France, and would have been transported from there by river across the Rhone Valley to Lyon, and then towards the Rhine border. There was a war going on here, and at least six or seven Roman legions had to be supplied.

Why do you favor that hypothesis?

González Cesteros: The ship seems relatively modern and, judging from the construction type, does not come from the Iberian Peninsula, but resembles ships from Ostia and Puteoli in today's Italy. The load is distributed homogeneously, indicating that it was an official, state-owned ship. But this is of course just a guess and has not yet been confirmed.

The amphorae are like time capsules - you can discover what was transported and where it was produced.

Can you still tell what was in the amphorae?

González Cesteros: Yes, some are even still sealed with their contents untouched. On board the wreck there are three different types of amphorae. All come from Andalusia, from the then Roman province of Baetica, and each has its own content. One contains, for example, salted pieces of fish or fish sauce. But we do not know everything yet. We have only recovered and examined 18 of the 1,000 amphorae. But we plan to retrieve at least ten of each variety.

How do you examine a container that has been lying on the seabed for millennia? Is it very delicate?

González Cesteros: Yes, that's why we work with saltwater tanks. The amphorae are transported in these tanks from the sea to the laboratory, and are also examined in saltwater tanks. Everything is measured and drawn. Some amphorae are already broken, but others have waterproof resin seals. These are like time capsules for me – you can discover what was transported and where it was produced. Some people might think these are just containers, but for me they are part of our social and economic history.

What else have you found in the amphorae?

González Cesteros: Some contained grape seeds, others olive stones. There was a Roman product called "defrutum", a type of grape syrup, in which olives were preserved.

Have you ever tried to "cook" and taste this mixture?

González Cesteros: I haven’t, but my Spanish colleagues have made the fish sauce according to the Roman recipe.

And does it taste good?

González Cesteros: Well, it’s very salty. Colleagues from France have also studied the wine. It has a high alcohol content because of its age. It originally had 20–30% to enable good preservation. You can drink it, but you should do like the Romans and dilute it with water!

The foodstuffs have been lying there for around 2,000 years – do you wear a mask when you open the amphorae? Haven’t the fruit and fish gone off?

González Cesteros: No! 46 meters below sea level, in the dark, that's like a fridge. But I chilled myself while examining the amphorae. In recent weeks in Girona, I have stood many hours a day in the saltwater tank.

One last question – keyword sustainability: were the Roman amphorae actually reusable? Could you wash and reuse them?

González Cesteros: Scientists are not quite sure about that. Some say the amphorae were used several times. I believe, however, that the amphorae were usually reused only secondarily, no longer as transport vessels, but as an insulating material, as a latrine or – broken up – as flooring. They were cheap to manufacture, made of clay and sand. In Rome, there is a hill, the Monte Testaccio, made up exclusively of amphora fragments – an early waste dump for disposable crockery, if you like.

Horacio González Cesteros is a research assistant at the Austrian Archaeological Institute of the OeAW. He studied history and archeology at the Autonomous University of Madrid. Since 2017, he has been directing the project "Byzantine Amphorae from Ephesus" as part of the Lise Meitner Programme of the Austrian Science Fund FWF.

AUSTRIAN ARCHAEOLOGICAL INSTITUTE OF THE OEAW 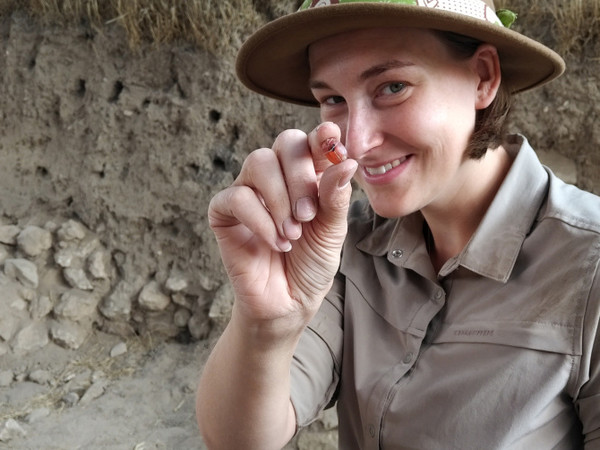 Excavations in Israel shed new light on the Bronze Age