Finds of this kind are extremely rare: in St. Catherine's Monastery in Sinai, a researcher from the Austrian Academy of Sciences has discovered a previously unknown text from Homer's time. Only fragments on two sheets have survived, but a poetic text can be reconstructed from them, telling of the childhood of the god Dionysus.

It is the dream of every scholar of antiquity: the discovery of a previously unknown text from the ancient world. A scientist at the Austrian Academy of Sciences (OeAW) has made such a spectacular find. During her doctoral studies at the University of Vienna and as part of the Sinai Palimpsests Project, Giulia Rossetto found medieval parchment sheets that reveal previously unknown texts from Homer's time that had been overwritten with other texts in later centuries. An article about the unique discovery has now been published in the "Zeitschrift für Papyrologie und Epigraphik" (Journal of Papyrology and Epigraphy).

"It is a poetic text in hexameters, the standard meter of epic poetry. This came from an epic that originally probably comprised 24 books, and the existence of which has so far only been indirectly shown," says Giulia Rossetto from the Institute for Medieval Research of the OeAW. With painstaking work, she was able to decipher the erased writing on the two sheets of parchment, letter by letter. The mention of the name Dionysus, the ancient god of wine, was an important clue to the meaning of the text, she says.

Text about childhood of the god Dionysus

By means of multispectral imaging and subsequent computer-aided image analysis, the fragment, which was in a very poor condition, was made legible again. In terms of content, the text revolves around the childhood of the god Dionysus. It mentions toys and gifts used by adversaries – the Titans – to distract the child.

"These details were previously only known indirectly, i.e., from quotations in other works. Now, for the first time, we have the original text on which these quotations are based," says Claudia Rapp, professor at the University of Vienna and head of the Division of Byzantine Research at the OeAW. The text was known until late antiquity: the font style suggests that it was copied in Egypt in the 5th or 6th century. Rapp says: "This discovery is of great interest in terms of cultural history, because it shows that there was still an active interest in religious texts from pagan antiquity in Egypt in the 5th or 6th century, at a time when Christianity was becoming firmly established in the Roman Empire."

In the centuries that followed, however, the text was erased to allow the precious parchment to be reused. Such so-called palimpsests were a form of mediaeval recycling, the OeAW researchers report. In the early 10th century, the pages were rewritten, this time in the Christian monastery of Mar Saba near Jerusalem by Arabic-speaking monks, with descriptions of the lives of saints.

After that, the trail was lost until 1975, when a room for unused manuscript material in St. Catherine's Monastery in Sinai was reopened. The erased texts in Sinai came from at least four different manuscripts in two different languages: Greek and Christian Palestinian Aramaic – a liturgical language that has not been used since the 13th century and is mainly known from palimpsest finds such as that now published.

The aim of the Sinai Palimpsests Project is to make the centuries-old valuable palimpsest manuscripts of St. Catherine's Monastery in Egypt legible and available in digital form. So far 74 manuscripts have been deciphered. Claudia Rapp from the University of Vienna and the Austrian Academy of Sciences (OeAW) is the scholarly director of the project. 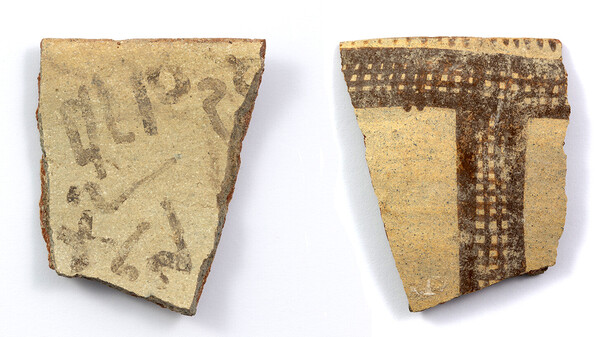