Who regulates the key regulator? Scientists of OeAW and MedUni Vienna report online in the journal Science about a newly discovered mechanism by which RAS proteins, central to cancer signaling, are regulated in their activity and localization. 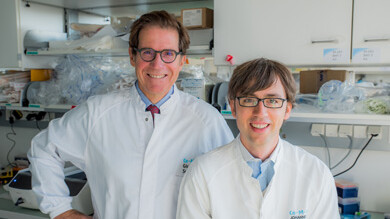 Of the more than 23,000 genes in the human genome, only a handful assume a very central role in signal transduction and growth regulation. Of these, the three genes encoding RAS proteins are particularly important, as they are found mutated in over 25 per cent of human cancers. The processes around the RAS gene products are also involved in a variety of rare human developmental disorders called the RASopathies. RAS proteins are absolutely central regulators of growth and oncogenesis and, in turn, every regulator of RAS is poised to be fundamentally important for cancer and a broad variety of human diseases.

Key for understanding of rare diseases

Scientists at CeMM - Research Center for Molecular Medicine of the Austrian Academy of Sciences (OeAW) and the Medical University Vienna now report on the mechanistic link between the LZTR1 gene, previously associated with a variety of rare disorders and rare cancers, and RAS. These findings provide a new key regulator of a pathway that is one of the best studied signaling pathways in biology. As such, it represents a major advancement. The study not only sheds new light and details on the regulation of a central growth-promoting protein, but also offers a molecular explanation for an unusually large number of pathological conditions, ranging from different types of brain and pediatric cancers to developmental pathologies like Noonan syndrome.

The research team found that the protein called LZTR1, in concert with its copartner cullin 3, regulates RAS by attaching to it a small molecular tag, called ubiquitin. The modified RAS proteins demonstrate altered localization within the cell and reduced abundance. Mutational defects or inactivation of LZTR1 lead to an increase of RAS dependent pathways causing dysregulation of growth and differentiation. LZTR1 can therefore be considered a breaker of RAS action.

Giulio Superti-Furga, the Principal Investigator who directed the study, and Scientific Director of the Academy’s CeMM explains: “The study is part of a long-term effort to understand the mechanism of anti-cancer drugs in leukemia and beyond and I find it very rewarding to have contributed to the discovery of a fundamental aspect of RAS regulation, the key player in cellular growth.”Johannes Bigenzahn, the MD postdoctoral fellow and first author adds: “I am very happy from a medical as well as scientific perspective to have discovered a mechanism behind so many different genetic diseases as well as many unusual forms of cancer. It is reasonable to expect that our discovery may lead to the development of new therapeutic strategies targeting RAS-dependent phenotypes in the future.”

The study appearing in Science was carried out in close collaboration with the Mount Sinai Icahn School of Medicine, New York and the Netherlands Cancer Institute, Amsterdam. A parallel study at KU Leuven in Belgium both validates and expands these findings, prominently proposing LZTR1 as a future textbook cornerstone of cellular growth regulation.

Funding:
The study was funded by the European Research Council (ERC), the Austrian Science Fund (FWF) and the Austrian Academy of Sciences (OEAW).