The robot lander “InSight” has successfully reached the surface of Mars. For the next two years, it will study the interior of the planet. OeAW space researchers are involved in the evaluation of the data collected by the probe. 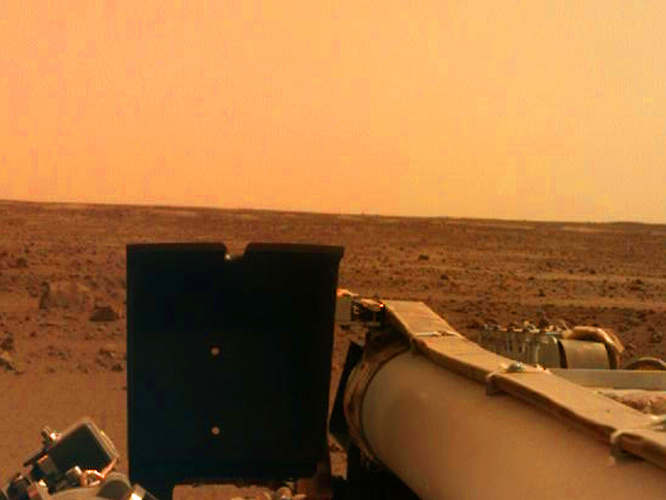 InSight achieved its goal after a journey of about six months and a risky landing maneuver. During the evening of 26 November 2018, the NASA probe “INterior exploration using Seismic Investigations, Geodesy and Heat Transport” (InSight) successfully landed on Martian soil in the Elysium region. It will spend the next two years as a geophysical observatory, studying the interior of the planet, as well as measuring tremors and “Marsquakes”.

At the time of landing, Mars was over 146 million kilometers away, and radio signals took almost eight minutes to reach Earth. The fully automatic landing of InSight on Mars took only a few minutes. However, it is considered a particularly tricky maneuver due to the special nature of the Martian atmosphere. Not even half of all landing attempts on the surface of the Red Planet are successful. Most recently, NASA's Mars rover "Curiosity" managed it six years ago; by contrast, the European probe Schiaparelli crashed in 2016. InSight has already been able to communicate with the Earth, sending through the vastness of space the message "I made it", along with photographs of the Martian surface.

The new NASA mission was specially equipped to find out more about the difficult conditions associated with Mars landings. "With InSight, two small satellites were sent along for the first time. These fly behind the probe and closely observe the entry of InSight into the atmosphere and the following landing sequence", explains Günter Kargl, scientist at the Space Research Institute of the Austrian Academy of Sciences (OeAW). The two so-called CubeSats MarCO-A and -B, unofficially called WALL-E and EVE, were sent along as a technological demonstration. If their efforts prove successful, such technology is likely to feature much more prominently on future interplanetary missions.

Europe has participated in NASA's InSight mission by providing several of the instruments. These include, for example, a probe developed in Germany that will drill into the planet's surface to enable more precise measurements, such as the analysis of tremors and quakes. The Space Research Institute of the OeAW will be involved in the evaluation of the data to be gained over the next two years. Amongst other things, the space researchers hope to gain new insights into the formation of the planet billions of years ago.

The participation of the OeAW Institute will also bring the Austrian flag to Mars for the first time. In addition to geometric figures and reference colors, the sample image for the calibration of a camera shows the national flags of all partner countries, including Austria.

Participation in the InSight project by the OeAW Space Research Institute was funded by the Austrian Research Promotion Agency (FFG), and supported by the Institute of Soil Mechanics, Foundation Engineering and Computational Geotechnics of Graz University of Technology.

Institute for space research of the OEAW