Reformer and visionary but also "debt emperor" – Maximilian I was a dazzling and, in many ways, very modern ruling personality. This year marks the 500th anniversary of his death. OeAW historian Manfred Hollegger talks about the "Last Knight", who even wanted to become pope. 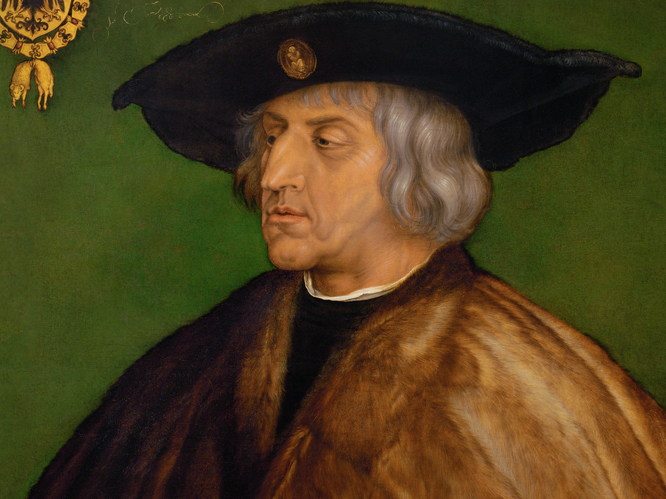 Maximilian's career path was an impressive one: Duke of Burgundy from 1477, Roman-German King from 1486, ruler of the Habsburg Hereditary Lands from 1493 and Holy Roman Emperor from 1508 until his death on January 12 1519. Only with one position, things did not go his way: "your good father, Maximilian, future pope," he once wrote in a letter to his daughter. But not even an emperor can do everything.

Nonetheless, the regent achieved a lot. Probably his most central legacy is that, through clever war policy and strategic marriages, he laid the foundation for the rise of the Habsburg dynasty to a world power. An important component of his success was his modernity. After growing up in the world of the Middle Ages, he experienced the transition to modern times in his adult years. "As a politician, Maximilian believed in progress and repeatedly instigated reforms", explains Manfred Hollegger from the Institute for Medieval Research of the Austrian Academy of Sciences (OeAW).

Hollegger is one of the organizers of the conference "Maximilian I (1459-1519). Character, rifts and upheaval in a period of transition", which took place from 18 to 23 March 2019 in Innsbruck, Wels and Vienna. At probably the largest conference in the 500th year since the death of the "last knight", international experts shed light, from a wide range of perspectives, on his impact on politics and culture.

When the media talk about Emperor Maximilian I, they like to call him the "Last Knight". When did this epithet originate?

Manfred Hollegger: Not until 1830 when "Der letzte Ritter: Romanzenkranz" was written by the poet Count Anton Alexander von Auersperg, under the alias Anastasius Grün.

Were knights’ tournaments still contemporary during Maximilian's reign at the beginning of the 16th century?

Hollegger: Not really. Like skeleton in St. Moritz or polo today, it was a sport for the well-to-do. Maximilian had encountered such tournaments in Burgundy, as a sport in which men exhibited their strength and skill, and he included them at Imperial Diets and other meetings.

So was Maximilian nostalgic?

Hollegger: One should not confuse a Renaissance prince with a nostalgic, nor Maximilian's scientific and artistic engagements with backwardness. As a politician, Maximilian believed in progress and consistently instigated reforms.

Maximilian’s goal was an institutional, centralized territorial state with corresponding bureaucracy and control.

What were his most important reforms?

Hollegger: One example is his modernization of warfare: he had foot soldiers fight in closed formations in the middle, and put the riders on the flanks. He also recognized the value of artillery in the field, made it more mobile and standardized the caliber.

And in civilian matters?

Hollegger: His goal was an institutional, centralized territorial state with corresponding bureaucracy and control. His reforms in the judicial system were also very modern. As had been established in the Reich, Maximilian established a court of appeal in Austria, similar to today's Supreme Court of Justice. The estates were outraged and felt limited in their rights – this is, by the way, comparable to the discussion today as to what extent Europe should be allowed to interfere in national affairs. Back then, the question was: should the prince be able to interfere in autonomous estate matters such as taxation or legal practice?

How did he finance all these measures?

Hollegger: Mainly through loans from trading and banking houses in Augsburg, particularly those owned by the Fugger family. The result was a mountain of debt that was only paid off to a reasonable extent ten years after his death.

Maximilian had many plans, some of them unconventional, and he had them examined for their feasibility. But that's the way modern management works today. He certainly wasn’t an unrealistic dreamer.

Maximilian also had big plans for himself – he wanted to be both Pope and Emperor. Wasn’t this plan completely absurd?

Hollegger: It was a very bold vision, but it was more than a passing idea, as shown by the fact that he asked his "Finance Representative" Liechtenstein to gauge whether the Fuggers would be willing to finance the plan. The idea was to bribe the papal court. His daughter – then governor of the Netherlands – informed Maximilian that he would run for office and would never again look at a naked woman. His letter written in French is signed with "your good father, Maximilian, future pope". The daughter, a cool-thinking politician, was appalled. But the Fuggers pulled out and nothing came of it anyway. Maximilian had many plans, some of them unconventional, and he had them examined for their feasibility. But that's the way modern management works today. He certainly wasn’t an unrealistic dreamer.

Because many manuscripts and works of art were created on Maximilian's order, one often hears the buzzword "media emperor". What do you think?

Hollegger: His contemporaries certainly did not see him as such. He achieved little political impact with pamphlets, leaflets and printed speeches. Nevertheless, it is certainly true that he combined brilliantly all the media available at that time for his major literary and artistic projects: Weißkunig, Theuerdank, Freydal, Ehrenpforte and Triumphzug. And the impact that he wanted to achieve with his monumental tomb continues today!

Manfred Hollegger is a research associate at the Institute for Medieval Research of the OeAW, where he is deputy project manager of Regesta Imperii Vienna. The long-term research project – a collaboration with the Academy of Sciences and Literature in Mainz – aims to index the documentary and historiographic sources on the Roman-German kings, including Maximilian I.

The Conference "Maximilian I (1459-1519). Character, rifts and upheaval in a period of transition" took place from 18 to 23 March 2019. It was a cooperative event between the OeAW and the Universities of Innsbruck and Vienna, the Musealverein Wels and the museums of Wels, with parts of the program in Innsbruck, Wels and Vienna.