What can we learn from dealing with the corona pandemic for future crises? This question was the focus of the dialogue format "Science and Politics in Conversation", where scientists and parliamentarians met at the invitation of the Austrian Academy of Sciences and the National Council. One conclusion: knowledge about infections and the associated data should be more accessible.

For the third time, OeAW President Anton Zeilinger and the President of the National Council, Wolfgang Sobotka, invited participants to the dialogue format "Science and Politics in Conversation". The topic this time: COVID-19 – lessons for the future. © Parliamentary Administration/Johannes Zinner

Pressing societal questions require fact-based exchange between political decision-makers and scientific experts – the corona crisis brought this home in an unprecedented way. Intensifying such dialogue is the aim of the series "Science and Politics in Conversation", which was launched by the Austrian Academy of Sciences (OeAW) and the Parliament, and which took place for the third time on June 16 at Palais Epstein in Vienna. On the agenda this time: the corona crisis and the question of what lessons can be learned from dealing with the pandemic.

From medicine to the economy

To this end, researchers from the OeAW and other Austrian scientific institutions met members of the National Council from all represented political groups, as well as members of the Federal Council. Perspectives from medicine and life sciences, mathematical models on the spread of the coronavirus and the use of artificial intelligence, effects on people and society as well as the consequences for the economy were discussed.

During the subsequent press conference, President of the National Council Wolfgang Sobotka said he was in no doubt that: "This exchange will add value for political work." The analysis of what factors are needed to successfully get through and out of the crisis is now particularly important. Anton Zeilinger, President of the OeAW, has a similar view, and emphasized that the dialogue is a "multidisciplinary format". This allows a comprehensive discussion of what can be learned from the corona pandemic for similar situations in the future – and not just for Austria, but also internationally.

The President of the Academy also made it clear that science cannot provide simple answers. Every piece of new knowledge also creates new unknowns; every answer raises new questions. Science can provide expertise, facts and the current state of research, but cannot relieve politicians of the responsibility of making decisions under uncertainty. This is precisely what makes the dialogue between science and politics so important.

In addition to Sobotka and Zeilinger, whose initiative the discussion format can be traced back to, there were four scientists on the podium who, together with other researchers, had exchanged views with the parliamentarians. From the perspective of their respective subjects, they drew various conclusions from the corona crisis.

Sylvia Knapp, research group leader at the CeMM (Research Center for Molecular Medicine of the OeAW) and Professor at the Medical University of Vienna, rated the scientific approach to the pandemic positively: "The crisis has shown what science can do in a very short time". However, she emphasized, COVID-19 also showed potential for change for Austria: "We noticed that our expertise is very scattered." It is therefore necessary to pool knowledge about infections in Austria. Knapp also sees room for improvement in the data situation: digital access to medical data, while observing data protection laws, to quickly survey disease progression and risk groups is urgently needed. The infection biologist added: "The return to nationhood came surprisingly quickly. However, the global challenge of the pandemic can only be overcome together."

The effects of the corona crisis on people and society were the focus of statements by Magdalena Pöschl from the Institute of Constitutional and Administrative Law at the University of Vienna. In particular, she looked at the legal side of the corona legislation and stressed that the crisis had shown that communication and the clarity of rules were crucial. "It is very welcome that the measures to cope with the corona crisis are now being evaluated," says OeAW member Pöschl. This makes it possible to reflect on how, in future, legal clarity can be maintained with new rules, even under the time pressure of a pandemic, and how public acceptance of the implemented measures can be kept high.

A key question for Martin Posch from the Center for Medical Statistics, Informatics and Intelligent Systems at the Medical University of Vienna is: which measures were most effective in containing the epidemic? To find out, research needs access to comparable data. However, according to the statistician, the comparability of data is not always given. "In Europe, too, many figures, such as the number of deaths, are not standardized." There is currently a consensus that the steps taken in Austria were effective overall. However, it is still unclear which of the numerous measures had what concrete effects.

It is also unclear what consequences the pandemic will have on the economy. Sigrid Stagl from the Institute for Ecological Economics at the Vienna University of Economics and Business believes that increasing resilience will be important for future crises or a "second wave": the robustness of the economic system to crises must be strengthened in the long term.

The panel agreed that all of this – a resilient economic system, good data availability, clear legal provisions, and the pooling of scientific expertise – was important not only for the corona crisis, but also for combating another ongoing crisis: climate change. Because, as Magdalena Pöschl said: "The climate crisis will keep us occupied longer than the search for a vaccine."

The dialogue format "Science and Politics in Conversation" brings together members of parliament and researchers at the invitation of the Austrian Parliament and the OeAW. The goal is to provide politicians with sound knowledge as the basis for decision-making. After the launch in November 2018, the second event of the series, on digitalization, took place on June 18, 2019. The third date, on June 16, 2020, was dedicated to the corona crisis. 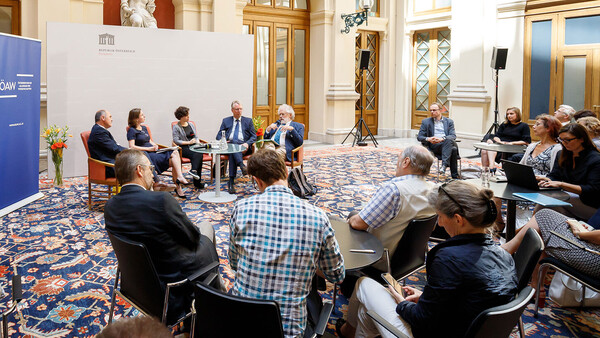 Towards a "European way" for digitalization