Glaciologists from all over the world have published an open letter in the journal "Nature", urging action against global warming. The letter is addressed to the Climate Change Conference in Madrid. One of the co-authors of the letter is the OeAW glaciologist Andrea Fischer. In an interview she explains why glaciers are important indicators of climate change, how the situation is changing as a result of global warming and why we need to act now. 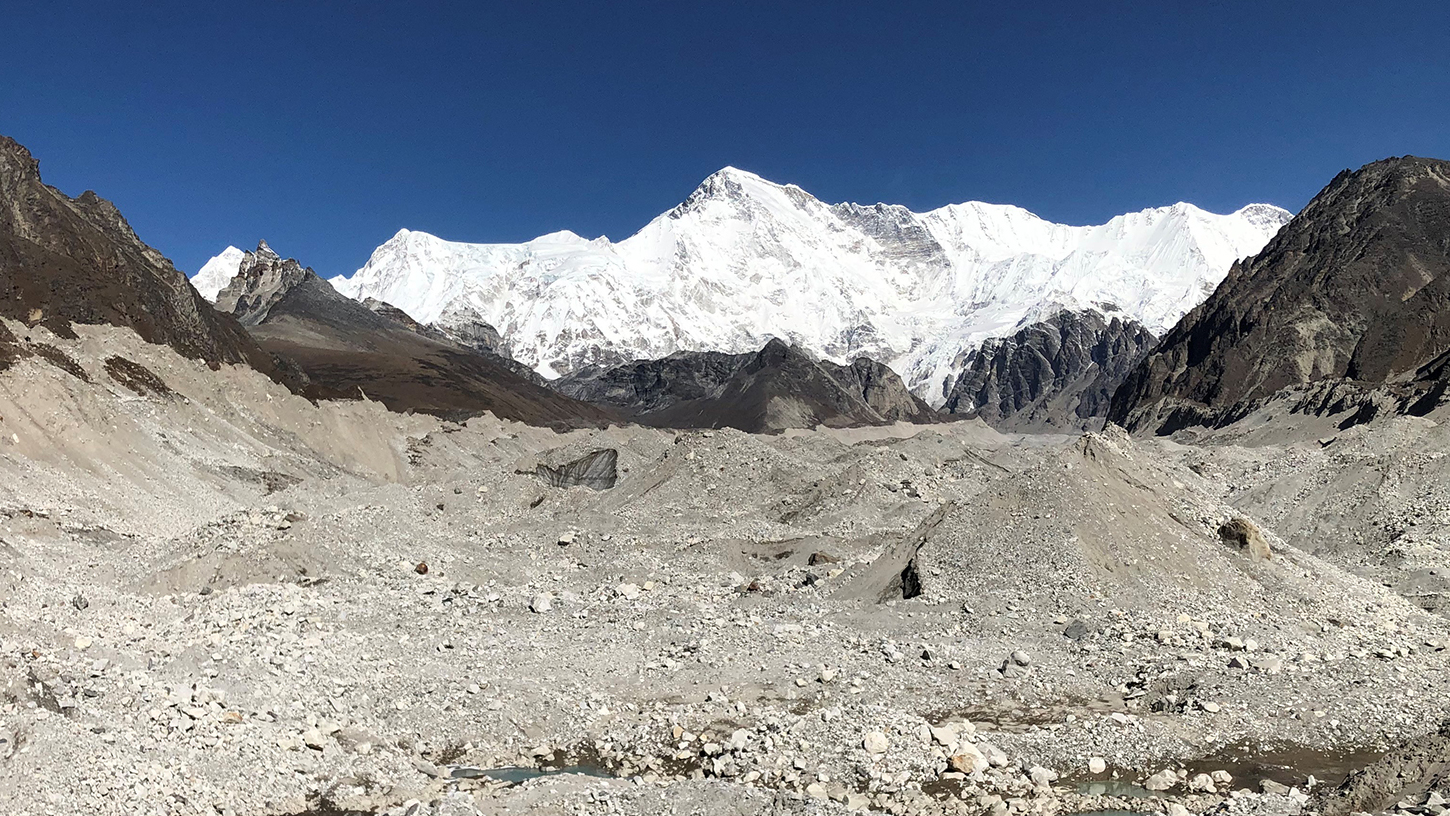 Worldwide, glaciers are melting due to climate change. The picture shows the Ngozumpa glacier in the Himalayas, the largest ice flow in Nepal. © ÖAW

The current rate of glacial melting worldwide is "unprecedented," and is likely to have a major impact on the water supply and sea level. This is what 39 glaciologists write in Nature in an open letter to the participants of the 25th UN Climate Change Conference in Madrid. According to the article (whose first author is Michael Zemp of the University of Zurich), the rise in temperature has caused glaciers around the world to lose around 9,000 gigatons of ice since 1960.

To convey the magnitude of loss, a comparison, which the glaciologists use in their letter, helps: the lost ice mass would be enough to cover the area of ​​Spain under a 20-meter-thick layer of ice. This alone has raised the sea level by three centimeters, say the scientists – among them Andrea Fischer from the Institute for Interdisciplinary Mountain Research of the Austrian Academy of Sciences (OeAW). If the melting continues unabated, glaciers could be history in just a few generations. "The small European glaciers are strongly affected because of their low position, especially in the Eastern Alps", Fischer explains in an interview.

Glaciologists see the effects of climate change directly. Why is the open letter in "Nature" only being published now?

Andrea Fischer: Every ten years, the national experts in the field meet, and then we have the opportunity to take joint action like this. People have been observing glaciers systematically and regularly for 125 years now. We have data that clearly shows the results of global warming. That's why we must do something now.

The letter states that there might be no more glaciers by the year 2300. Do we still have time to take countermeasures?

Fischer: Here in the Alps, we focus our future scenarios on the period up until the end of the current century. Since 1990 we have seen glaciers recede considerably – in the Eastern Alps there will likely be hardly any glaciers left by the end of the century, while the situation is a little less dramatic in the Western Alps. The large glaciers of the polar regions in Greenland or the Antarctic are fortunately much more stable.

Since 1990 we have seen glaciers recede considerably – in the Eastern Alps there will likely be hardly be any glaciers left by the end of the century.

But 2300 is so far in the future that I think the predictions are very uncertain. We do not know if we will be living in a plastic world or if we will have gone back to living like people in the Stone Age. But we should not bury our heads in the sand. We can influence the human component of climate change, that's clear. The warming is expected to continue unchanged over the next ten years. But we can influence the time after that with our current decisions.

Fischer: The small European glaciers are strongly affected because of their low position, especially in the Eastern Alps. In the Karakorum, on the other hand, there is an anomaly – here there are glaciers that are actually growing. This is probably not due to the climate, but to the natural rhythms of these glaciers, which go through long cycles with periodic advances and subsequent declines. Here, too, warming will bring about a decline in the longer term. At high altitudes, the melting of the glaciers also progresses more slowly.

When is a glacier considered to have disappeared?

Fischer: We are now being forced to come up with a definition here. Is a glacier gone when it reaches a minimum limit or only when the ice is completely gone? Rock glaciers, which consist of a debris-ice mixture, may last a long time even in warm conditions. Only now are we developing theories, because we did not have the problem in the past with "healthier" glaciers.

We have the potential to fight climate change, but whether that is enough to save the glaciers in the Alps is uncertain.

What role do glaciers play in the fight against climate change?

Fischer: On the one hand, the comparative images documenting drastic glacial retreats in the 20th century are very impressive. They show people without a scientific background very clearly that something is happening here. On the other hand, glaciers were crucial for understanding climate change. We know that the glaciers in Central Europe reached the Chiemsee about 18,000 years ago. That's how we found that the climate is changeable. Glaciologists have also contributed to clarifying the role of CO2 as a greenhouse gas.

Are there models that can explain glacial retreat without human influence?

Fischer: The connection between glacial retreat and humans comes from our atmosphere models. That's because, in the end, glaciologists can only measure the effects of rising temperatures, but not their cause. There are discussions on alternative causes of glacial retreat, but they cannot explain the current trend. Discussions are important in science, but the current consensus is clear: people are responsible.

Instead, we need to look at how the world will change as the glaciers disappear.

How will the glaciers in Austria develop in the future?

Fischer: We have over a hundred years’ worth of data. This is both a lot and not very much – more than in most regions of the world, but not enough for projections of several centuries. By 2050, the models will be better. From today's perspective, even glacier forecasts have an uncertainty of 50% by the end of the century. This is also due to feedback processes such as the increasing debris cover of the glaciers. In Austria, the glaciers are so small that they are at the limit of resolution of today's models. This further increases the uncertainty. Forecasts for 2100 predict anywhere from 10–70% glacial loss. If you want to enjoy glaciers, you should do it soon.

So, the outlook for the local glaciers is not very good?

Fischer: Luckily, much of the ice is in the big polar glaciers. The glaciers in the Alps and in the Himalayas are rather insignificant in comparison. We have the potential to fight climate change, but whether that is enough to save the glaciers in the Alps is uncertain. We do not know for sure whether the Alps have ever been ice-free. But in the future, they could be. Even without further warming, the Alpine glaciers will continue to lose mass and perhaps disappear. This cannot be stopped by artificial snow or by covering the ice masses in the summer, only delayed. Instead, we need to look at how the world will change as the glaciers disappear.

As the glaciers melt, the sea level rises, threatening valuable settlement areas. In the Alps, the glaciers stabilize the subsoil. Melting glaciers can lead to increased mudslides and rockfalls.

What consequences does the melting of the glaciers have?

Fischer: The melting makes climate change visible. But it also impacts human living spaces. As the glaciers melt, the sea level rises, threatening valuable settlement areas. In the Alps, the glaciers stabilize the subsoil. The water from the melt brings few problems, but as we have already seen in Switzerland, melting glaciers can lead to increased mudslides and rockfalls that threaten residential areas. Vegetation colonizes the exposed areas quickly, but not immediately.

Andrea Fischer is Interim Director of the Institute for Interdisciplinary Mountain Research of the OeAW and Corresponding Member of the Academy. She is the Austrian correspondent of the World Glacier Monitoring Service (WGMS). The network of experts initiated the open letter to "Nature" on glacial melting.

The open letter is entitled "Glacier monitoring tracks progress in limiting climate change" and was published via Open Access on 2 December 2019 in the journal "Nature".

The causes and consequences of climate change for the environment, people and society were the focus of research projects, conferences and lectures at the OeAW in 2019. More about climate research can be found on the Academy's website.