How can the UN Sustainable Development Goals be achieved by 2030? What hurdles have to be overcome? And what role do science and the media play? Experts from all over the world discussed progress and the need for action at a sustainability conference at the OeAW. 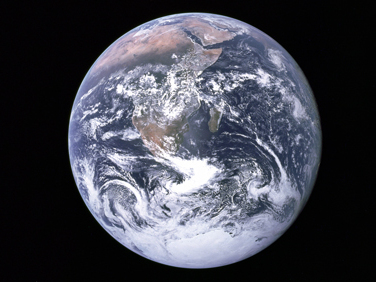 The blue planet in the midst of the blackness of the universe. This famous photograph of the earth, the so-called Blue Marble, was shot in 1972 by an Apollo mission. It immediately spread around the world and became the symbol of the burgeoning environmental movement. It was also to be seen at the beginning of the international conference "Global Sustainable Development Goals in a Mediatized World", which took place from 4 to 5 April at the Austrian Academy of Sciences (OeAW) in Vienna. Wolfgang Lutz, scientific director of the OeAW Vienna Institute of Demography, showed the photo at the beginning of his presentation, which introduced the topic of the conference: the "Agenda 2030 for Sustainable Development", the 17 sustainability goals formulated by the United Nations in 2015. These Sustainable Development Goals (SDGs) include "No Poverty", "Zero Hunger", "Quality Education", "Reduced Inequalities", "Climate Action", and "Responsible Production and Consumption". The overall goals, which should be implemented by the year 2030, comprise numerous more concrete sub goals.

Media is missing in the sustainability goals

The OeAW meeting focussed on an aspect that has received little attention and yet, as the participants agreed, will be central to the successful implementation of the SDGs: the role of the media. "It is very interesting that in the 17 SDGs and also in the 169 sub goals, the question of free and independent media plays no role whatsoever", says Verena Winiwarter, environmental historian and professor of social ecology at the University of Natural Resources and Life Sciences, in an interview for the OeAW podcast MAKRO MIKRO. She organized the conference together with Simone Gingrich, Matthias Karmasin and Wolfgang Lutz, who are also OeAW members. "The media did not feel included", she explains, which in turn has meant that the SDGs have so far been rather neglected in the media.

Ecology and society must be considered together

To highlight the focal points, the conference panels were assigned to one or more of the 17 SDGs. But it was also clear that the goals cannot be considered separately – instead they are closely related. For example, when it comes to ecosystems, there are many factors that are interlocked in many ways. Linxiu Zhang from the United Nations Environment Program - International Ecosystem Management Partnership (UNEP-IEMP) introduced a so-called "nexus approach", with a focus on linking the SDGs. Nyovani Janet Madise of the African Institute for Development Policy in Malawi similarly emphasized that ecological and social developments must be considered together. She talked about the 1994 International Conference on Population and Development in Cairo, where 179 governments agreed to provide everyone access to sex education and contraceptive methods, as well as reproductive and sexual health services, within 20 years. Madise highlighted the situation on the African continent 25 years after this agreement and talked about how the UN SDGs could help, as she also describes in an interview with the OeAW.

How to tell "uncomfortable" truths

Communication of the SDGs is made difficult not only by the complexity of the issues, but also by the fact that they often involve "uncomfortable truths", as emphasized by media and communication scientist Matthias Karmasin from the OeAW and the Alpen-Adria-Universität Klagenfurt in conversation with MAKRO MIKRO and in an interview. This applies not only to communication to a wide audience, but also to cooperation between science and politics, as the presentation by Vladimír Šucha, Director of the Joint Research Center of the European Commission, made clear. It is important to better understand and align the cycles and mechanisms of research and policy making, Šucha said, adding that the "data explosion", the huge amount of information that has been growing exponentially since the 2010s, is a problem.

"We are flooded with information," said Alison Anderson, a sociologist at the University of Plymouth and Monash University in Melbourne, in her lecture about the current media and network society. This flood of information leads to cognitive dissonance and ultimately to the fact that we only pay attention to the information that confirms our already existing attitudes and ideas. "This is a real challenge for the sustainability goals", said Anderson.

It is therefore not enough simply to provide more information, but new ways of communicating climate-relevant facts have to be found. To be able to shape the future, we must be able to imagine it in a way that is both flexible and adaptable. This was the central point in the presentation by Roy Bendor from the Delft University of Technology in the Netherlands. He focused on interactive media, especially games, that use virtual or augmented reality technologies. Like Anderson, Bendor stressed that immersion is the best way to convey environmental awareness and the urgent need for action. We need to work against an "impoverishment of the imagination".

Thinking collectively about the future and training the imagination was also implemented at the OeAW conference. The last half day of the conference did not consist of plenary lectures but took the form of a discussion designed to engage a large group. This approach is part of the "Futures Literacy" model of conference guest Riel Miller, who works for UNESCO's Management of Social Transformation (MOST) program. Futures Literacy aims to make it possible to think about the future in an informed way and to use the imagination.

Liberation of the future from the present

At the moment, we are neither capable of imagining a good future, nor are we aware of the drama of the current situation, as Verena Winiwarter explains with an example: "We have crossed three of the nine 'planetary boundaries'. It's like saying, my kidney and liver are not working anymore, but as long as my stomach and lungs are okay, why should I be worried?"

To counter this paralyzing situation, it is important to provide knowledge. The second step is to open new perspectives by shedding the blinkers that restrict our outlook to the past and the present. Or in Winiwarter's words, "Freeing the future of these blinkers is what we are trying to do here".

The conference "Global Sustainable Development Goals in a Mediatized World" took place at the OeAW from 4 to 5 April and gathered around 40 experts on sustainable development in Vienna. The conference was opened by former President of Austria Heinz Fischer and OeAW President Anton Zeilinger.

The conference was accompanied by the exhibition "Human Nature. The Art of Sustainability", curated by OeAW members Anna Artaker and Uwe B. Sleytr. The exhibition can be seen in the auditorium of the OeAW until 3 May. More about the exhibition and the works of art can be heard in the Podcast MAKRO MIKRO.