Israeli Tel Lachisch is an archaeological treasure trove, where, for the second time this year, researchers from the Austrian Academy of Sciences have conducted excavations. Initial results indicate that the history of the Middle Bronze Age in the region will have to be rewritten. 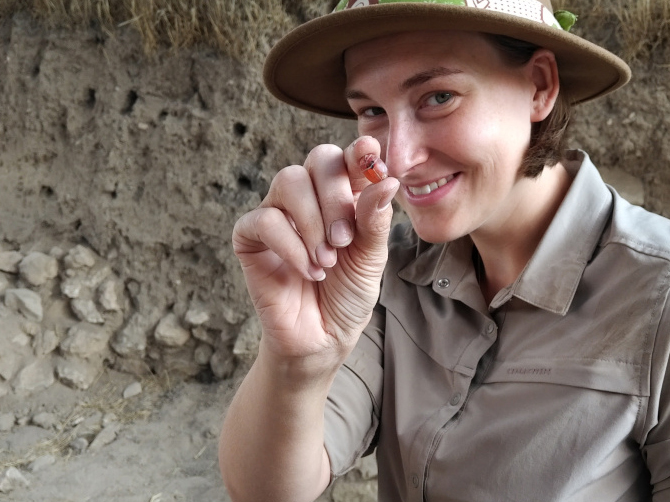 Tel Lachisch is one of the most important Bronze Age and Iron Age sites in today's Israel, and still holds many a puzzle for archaeologists. Human settlement during the Iron Age and Late Bronze Age is considered to have been well-researched through excavations. But only parts of the Middle and early Late Bronze Age, the historical period about 3,500 years ago, are properly understood.

Felix Höflmayer from the Institute for Oriental and European Archaeology of the Austrian Academy of Sciences (OeAW) is seeking to illuminate this period in history. For the second time this year, Höflmayer and his Austrian-Israeli team have carried out excavations in Tel Lachisch. In addition to numerous finds, the scientists were able to gain completely new insights into the destruction of the settlement. Previously, it had been assumed that the Egyptians were responsible for the settlement’s destruction in the Middle Bronze Age. However, the latest radiocarbon dating indicates an earlier collapse for the then thriving city of Tel Lachisch.

You have conducted archaeological excavations in Israeli Tel Lachisch with an international team of researchers from the OeAW and the Hebrew University of Jerusalem. What makes Tel Lachisch so special?

Felix Höflmayer: Tel Lachisch, which is located about 40 km south-west of Jerusalem, is one of the most important sites in Israel, and was inhabited throughout the Bronze and Iron Ages. As early as the Middle Bronze Age, Lachisch was important in a wide regional context, trading with Cyprus and Lebanon. In the Late Bronze Age, sources in Egypt refer to the location, and the extent of its significance at that time can also be inferred on the basis of imports from Cyprus, Egypt, and the Aegean.

But Lachisch was also of particular importance in the Iron Age and was, after Jerusalem, the second most important city in Judah. In addition to the well-preserved Iron Age findings, such as the six-chambered gate and the palace platform, the destruction by the Assyrians and Babylonians is of particular relevance. Lachisch fell shortly before the destruction of the first temple by the Babylonians in 586 BC and the subsequent Babylonian exile. Therefore, Tel Lachisch has been a historically significant site throughout all periods; however, despite several excavations, the Middle and Late Bronze Age strata have hardly been explored.

This is the first Austrian-Israeli excavation project ever and you already have new insights. What are they?

Höflmayer: At present we are working in two different areas known as Area S and Area P. Area S is a deep section on the western side of the site, where excavation had already been started by the University of Tel Aviv, led by David Ussishkin. It was excavated as far as the Late Bronze Age, and our goal now is to capture the transition from the Middle to Late Bronze Age. In Area S we discovered a corner of an enormous building that was already familiar to David Ussishkin. But while he dated these settlement layers to the 14th century BC, our radiocarbon dating shows that they actually date back to the 15th century BC.

Why is this knowledge so important for archeology?

Höflmayer: The revised dating is relevant because it would place the settlement strata contemporaneous with the papyrus Hermitage 1116A, which mentions a legation from Lachisch at the Pharaonic Court during the reign of Thutmose III or Amenhotep II. Now we can assign the corresponding archeology to this event.

At the transition from the Middle to Late Bronze Age researchers assume a fundamental social and political transformation. How might this have looked?

Höflmayer: The end of the Middle Bronze Age was characterized by massive destruction throughout the Southern Levant, usually dated around 1550 BC. Therefore, this destruction has been equated with another political upheaval, in Egypt, where a Canaanite foreign dynasty, the so-called Hyksos in northern Egypt, had seized power. Only the Egyptian kings of the late 17th Dynasty and finally Ahmose, the first king of the 18th Dynasty, were able to drive the Hyksos out of their capital Avaris. We know this historical event mainly from written sources, which also tell us that Ahmose then besieged Scharuhen, which today is Tell el-Ajjul in the Gaza Strip, with the Egyptian army. Therefore, it has long been believed that the destruction during the Middle Bronze Age in the region was due to the Egyptian army, which destroyed the former power base of the Hyksos.

And that is not the case?

Höflmayer: It seems not. Based on our radiocarbon dating so far, we believe that the massive destruction at the end of the Middle Bronze Age preceded the expulsion of the Hyksos. This would of course turn the historical narrative upside down. The thriving cities of the Middle Bronze Age would have collapsed first, and the Egyptians would have ventured into a political vacuum, before securing supremacy in the Levant during the ensuing Late Bronze Age. For this reason, the transition from the Middle to Late Bronze Age is of particular importance, as it provides insight into a period that has been called the "first globalization".

You are currently back in Vienna. What are your plans for the upcoming excavations in Tel Lachisch?

Höflmayer: The goal for the next two years is to reach the Middle Bronze Age in Area S, and to further excavate the palace in Area P so as to obtain a sound basis for our scientific dating. We will then complete the excavation and publish our findings. In addition, we are currently working on a proposal for a follow-up project dedicated to the social consequences of traumatic defeats, such as destruction by the Assyrians and Babylonians. Our ultimate goal is to establish Austrian-Israeli excavations in Tel Lachisch as a long-term project.

The project "Tracing Transformations" has been awarded a START grant by the Austrian Science Fund (FWF) and is based at the Institute for Oriental and European Archaeology of the OeAW. Awardee Felix Höflmayer and his collaboration partner Katharina Streit of the Martin Buber Society of Fellows of the Hebrew University of Jerusalem examine the transition between the Middle and Late Bronze Age.

Impressions from the Tel Lachisch excavation can also be seen in this short film about the Institute for Oriental and European Archaeology of the OeAW:
Making the Past Speak – Learn about OREA

InstitutE fOr Oriental und European Archaeologie of the Oeaw 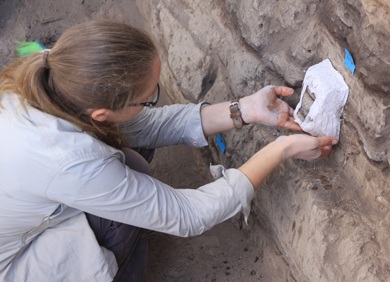