Austrian archaeologists have resumed their work in Ephesus, Turkey, after a two-year break. Excavation director Sabine Ladstätter from the Austrian Academy of Sciences explains what researchers expect to find in the ancient city. 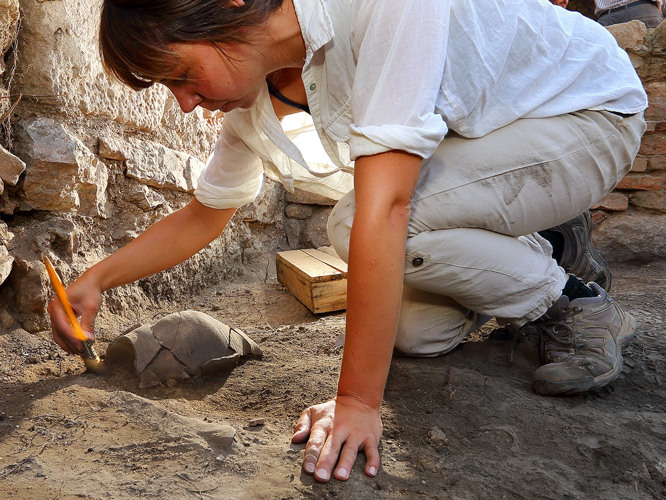 It was not a pleasant moment for Austrian archaeology in 2016 when, due to diplomatic tensions between Austria and Turkey, the excavations in Ephesus were halted from one day to the next. Fortunately, the archaeologists were able to resume their research about three months ago and excavation director Sabine Ladstätter is optimistic about the future: the director of the Austrian Archaeological Institute of the Austrian Academy of Sciences (OeAW), which is celebrating its 120th anniversary this year, is pleased about the continuation of many existing projects, as well as the establishment of many new ones.

After a two-year forced break, you and your team can finally continue your research in Ephesus. In what condition were the findings and the excavation office you left behind?

Meanwhile, the excavations are back in full swing. What are currently your most promising avenues of research?

Ladstätter: Currently, our focus is on a 7th century Byzantine quarter, where we uncovered an even older Roman gymnasium. It was built in the late 1st century AD as a public facility and offered space for all popular sports at that time, such as running and wrestling, but also for rest and relaxation, for example in several baths and pools.

What is special about this gymnasium?

It is the second largest gymnasium in the entire Roman Empire. We can reconstruct its appearance quite clearly, but until recently it was still unclear whether the gymnasium was also designed specifically to impress. We now know that the flooring was not marble but clay, which would have been less prestigious, but much more practical because it would have lowered the risk of injury.

So, it was not the figurehead of the then Emperor?

Ladstätter: The gymnasium had a certain prestigious character, for example, it had marble columns with a diameter of up to one and a half meters, but it was essentially a functional building. However, we can assume that the large pool, as well as the whole architecture, was ostentatiously finished and decorated.

How was the gymnasium destroyed – was it destroyed by an earthquake; not a rare occurrence in the region?

Ladstätter: No, at least not directly. A huge fire engulfed the gymnasium and even burst the thick pillars. We know this as we found charred wood from the garret and damaged marble. The fire could well have been caused by an earthquake, but such explanations should be treated with caution, as we lack definitive evidence.

What is your team currently working on?

Ladstätter: Currently, we are restoring the large Domitian fountain made of white marble, which has unfortunately already suffered quite a bit. It was renovated in the 1970s; however, the researchers then opted for concrete, which was common practice in such projects because concrete was considered durable and reliable. As we know today, this is far from ideal, as concrete deteriorates rapidly: the transitions between concrete and iron girders become brittle, water penetrates, and corrosion occurs.

How are you proceeding with the restoration?

Ladstätter: We now use fiberglass clamps instead of iron to stabilize the fountain, and we also try to restore the aesthetics of the fountain by optically adjusting the concrete. A fundamental problem is that, from a chemical point of view, marble has a very coarse-grained structure, into which water penetrates. So-called sugar corrosion occurs – the term fits, because the crumbled marble looks like granulated sugar. Therefore, we have to proceed with caution.

Which project are you particularly looking forward to?

Ladstätter: My personal pet project has to do with the many marble quarries scattered around Ephesus. Thanks to the Emil Suess Foundation of the Austrian Academy of Sciences, we have the resources to carry out rock analyses and to read the quarry landscape. The effort is worthwhile, because this was one of the largest marble mining areas of the entire Roman Empire. There were countless sarcophagi in the city of Rome made of white marble from Ephesus.

How do you go about finding millennia-old quarries that have been disused for so long?

Ladstätter: The local people are very helpful and cooperative. When you go to a tea house in the region and ask if anyone has heard about the quarries, people start talking. Everyone has heard something or knows of such a place. The information is not always accurate, but at least in one-eighth of the cases we indeed find archaeological and geological evidence, along with traces of marble quarrying written into the character and appearance of the local landscape. This is always a very satisfying moment.

You once described that you have a Babylonian jumble of languages, because the team is so international. Is the team essentially the same as before the dig was halted?

Ladstätter: The team has shrunk a little, but in essence they are the same archaeologists – and the confusion of languages has also remained. Recently, I sat at a table with 20 colleagues speaking in nine different languages (laughs). Of course, we speak mainly English, and when for example a Turkish archaeologist does not speak English, there is always a colleague who can translate for them.

Finally, a look into the near future: how will things continue in winter and into the new year?

Ladstätter: The rainiest time of the year starts in December. To continue research on site then would be pointless because after a rainy day it takes three days until everything has dried up again. We are therefore taking a break, but preparing further projects from Vienna. Our Turkish representative Filiz Öztürk, also at the OeAW, is staying in Ephesus and holding the fort. We are currently applying for an excavation permit for 2019 and are confident that it will be granted. After the two-year break, I am happy and relieved to be able to be optimistic about the future again.

Sabine Ladstätter studied Classical Archaeology and Ancient History at the Universities of Graz and Vienna. She is excavation director in Ephesus and Director of the Austrian Archaeological Institute, which became part of the Austrian Academy of Sciences in 2016. This year, she was also elected as a corresponding member of the Academy.

AUSTRIAN ARCHAEOLOGICAL INSTITUTE OF THE OEAW