Through randomly selected measurements, Austrian physicists can determine the quantum entanglement of many-particle systems. With the newly developed method, quantum simulations can be extended to a larger number of quantum particles. In the Science Magazine, the researchers report on the first successful demonstration of this method developed by physicists from Innsbruck, Austria. 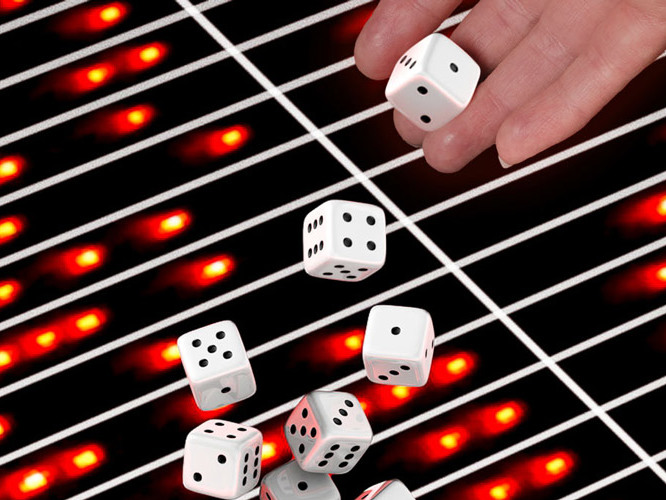 Quantum phenomena are experimentally difficult to deal with, the effort increases dramatically with the size of the system. For some years now, scientists are capable of controlling small quantum systems and investigating quantum properties. Such quantum simulations are considered promising early applications of quantum technologies that could solve problems where simulations on conventional computers fail. However, the quantum systems used as quantum simulators must continue to grow. The entanglement of many particles is still a phenomenon that is difficult to understand. “In order to operate a quantum simulator consisting of ten or more particles in the laboratory, we must characterize the states of the system as accurately as possible,” explains Christian Roos from the Institute of Quantum Optics and Quantum Information at the Austrian Academy of Sciences.

So far, quantum state tomography has been used for the characterization of quantum states, with which the system can be completely described. This method, however, involves a very high measuring and computing effort and is not suitable for systems with more than half a dozen particles. Two years ago, the researchers led by Christian Roos, together with colleagues from Germany and Great Britain, presented a very efficient method for the characterization of complex quantum states. However, only weakly entangled states can be described with this method. This issue is now circumvented by a new method presented last year by the theorists led by Peter Zoller, which can be used to characterize any entangled state. Together with experimental physicists Rainer Blatt and Christian Roos and their team, they have now demonstrated this method in the laboratory.

“The new method is based on the repeated measurement of randomly selected transformations of individual particles. The statistical evaluation of the measurement results then provides information about the degree of entanglement of the system,” explains Andreas Elben from Peter Zoller's team. The Austrian physicists demonstrated the process in a quantum simulator consisting of several ions arranged in a row in a vacuum chamber. Starting from a simple state, the researchers let the individual particles interact with the help of laser pulses and thus generate entanglement in the system. “We perform 500 local transformations on each ion and repeat the measurements a total of 150 times in order to then be able to use statistical methods to determine information about the entanglement state from the measurement results,” explains PhD student Tiff Brydges from the Institute of Quantum Optics and Quantum Information.

In the work now published in Science, the Innsbruck physicists characterize the dynamic development of a system consisting of ten ions as well as a subsystem consisting of ten ions of a 20-ion chain. “In the laboratory, this new method helps us a lot because it enables us to understand our quantum simulator even better and, for example, to assess the purity of the entanglement more precisely,” says Christian Roos, who assumes that the new method can be successfully applied to quantum systems with up to several dozen particles.

The scientific work was published in the journal Science and financially supported by the European Research Council ERC and the Austrian Science Fund FWF. “This publication shows once again the fruitful cooperation between the theoretical physicists and the experimental physicists here in Innsbruck”, emphasizes Peter Zoller. “At the University of Innsbruck and the Institute for Quantum Optics and Quantum Information of the Austrian Academy of Sciences, young researchers from both fields find very good conditions for research work that is competitive worldwide.”

Institute for Quantum Optics and Quantum Information Innsbruck of the OeAW