Snow and avalanche research has developed considerably in recent decades, says OeAW mountain researcher and climatologist Andrea Fischer. Nevertheless, it remains a challenge to accurately predict the risk of avalanches.

Happily for the tourism industry, this winter is now being talked of as the "best winter of recent years". But there is also a downside to the heavy snowfall: only a few weeks ago numerous places in Austria were snowed in and remained unreachable for days.

Andrea Fischer from the Institute for Interdisciplinary Mountain Research of the Austrian Academy of Sciences (OeAW) in Innsbruck classifies this year's "record winter" climatologically and explains why the avalanche risk is still so difficult to predict.

Can we really talk of a "record winter" this year?

Andrea Fischer: The amount of snow that fell within a few days in January was exceptionally high. In the winter of 1954, there was a very similar weather constellation in the same regions. Back then, heavy snowfall on the northern edge of the Alps starting at the beginning of the year resulted in avalanches in populated areas on 11 and 12 January, killing 125 people and destroying 491 buildings. The difference between that winter and the current winter is not so much in the snow depth, but in the further development of protective measures.

Based on observational data and modeling, snow and avalanche research has developed considerably in recent decades so that many avalanche-prone areas have been secured. In addition, there is a very good warning system that uses much better weather forecasts than was possible in the 1950s. So, despite the increase in populated areas and mobility today, less damage occurs.

Can the avalanche risk be estimated better today than it was in the past?

Fischer: Yes – thanks to satellite images, automated snow depth measurements and new models. However, there will never be complete safety, as avalanche formation involves chaotic, non-linear processes. Will there be a break in the snowpack? Will it spread? These questions are difficult to predict.

Which parameters are used for predictions?

Fischer: On the one hand we use the snow depth, which we have been able to record automatically since the 1970s, although mainly in valleys. High quality meteorological data, which in Austria we can get from the Central Institution for Meteorology and Geodynamics (ZAMG), are of course extremely important. These include measurements and forecasts of precipitation, temperatures, air pressure and above all wind speed. Due to the variable density of the snow cover and the influence of the wind, automated recording of the snowpack is very uncertain, so manual measurements are still important today.

Avalanche formation involves chaotic, non-linear processes. Will there be a break in the snowpack? Will it spread? These questions are difficult to predict.

Depending on its consistency and water content, one cubic meter of snow weighs between 150 and 700 kilograms. With the same snow depth, therefore, the weight of the snow can be very different. For example, when it snows at temperatures around zero degrees, the snow depth read by the meter may decrease, even though it is still snowing. The density and consistency of the snowpack can only be detected by inspections and on-site measurements. That is why, every year, at the Institute for Interdisciplinary Mountain Research of the OeAW, we still record the snow depths on the glaciers by hand. When we make these measurements at the end of April, we will see whether this winter has actually brought more than average snow to the glaciers.

The distribution of snow over larger areas is still difficult to measure. At our institute, Kay Helfricht's FWF project 'Plu-Snow' is dedicated to improving snow cover measurements, which will be important for avalanche forecasts and models of meltwater runoff.

Occasionally, the media brings up catastrophic scenarios. Are we less prepared for "real winter" than we used to be?

Fischer: I think there is a different attitude in the population. If a road was closed for two or three days 40 years ago, it was not a big deal. More subsistence farming and longer food storage meant that people were prepared for such situations. This is not the case anymore, and especially for businesses and trade, where deliveries are often "just in time". There is also a greater need for mobility today and significantly more people are affected: commuters and winter tourists in large numbers are a relatively recent phenomenon.

Is it true that extreme snowfall and particularly low temperatures in winter also have to do with global climate change?

Fischer: Both phenomena arise from certain 'stationary' weather conditions, i.e., those that stay in one place for a long time. A connection between this rather stationary behavior of front systems and climate change is suspected by several researchers. This mechanism also leads to week-long heat waves in the summer. We expect the alpine ice cores – such as those studied in the FWF project "Cold Ice" – to provide better information on past extreme snowfall events.

We clearly see from our glacier research that the climate is warming: glaciers react very slowly to climate changes and are therefore a reliable and highly visible indicator for long-term climate research.

What are your findings?

Fischer: Since 1850, the surface area of ​​ glaciers worldwide has halved. This is particularly clear in the Alpine region, because there are time series that go back more than 400 years. Relevant for the glacial shrinkage are the temperatures in May and September and the year-round precipitation. We will start our inspections and measurements again in the spring, but we can assume that the downward trend will continue.

Andrea Fischer is a glaciologist and director of the Institute for Interdisciplinary Mountain Research of the OeAW in Innsbruck. In 2013 she was Austrian of the Year in the category Research; since 2014 she has been a corresponding member of the OeAW.

Institute for Interdisciplinary Mountain Research of the OeAW 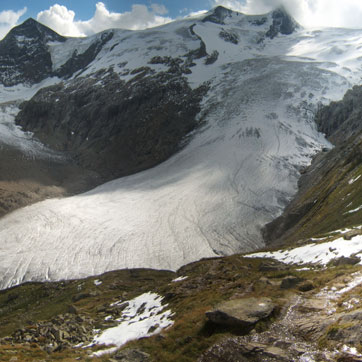