By drilling into the ice of Alpine glaciers we can get a glimpse of Europe's climate history. In an interview, OeAW glaciologist Pascal Bohleber explains why the Alpine glaciers provide an important, but time-limited, opportunity for climate research.

Glaciers are like history books – thousands of years of climate history can be gleaned from them. They are therefore an important historical source for research on current climate change. But it is precisely this climate change that is threatening them. "An urgent question is how long these archives will be preserved. Especially in the Eastern Alps, these records are rapidly melting away," says Pascal Bohleber, who works at the Institute for Interdisciplinary Mountain Research of the Austrian Academy of Sciences (OeAW) in Innsbruck.

Bohleber recently summarized the state of research on glaciers as climate archives for the Oxford Research Encyclopedia. In an interview, he explains how science elicits information about historical climate fluctuations from the glaciers and where the oldest ice in the Alps can be found.

Why are the Alpine glaciers a good climate archive?

Pascal Bohleber: The ice cores that we drill out of the Alpine glaciers are the little sisters of the polar ice cores. In the Arctic and Antarctic, we can see far into the past, for example in terms of the changes in greenhouse gases and temperature, because the ice is so old. The time scales are smaller in the Alps, but the drillings are much closer to settlement areas. The idea is that we use the same archive, but close to anthropogenic emission sources. This makes it easy to understand, for example, how people influence air quality. There is also a dense network of observation stations in the Alps and access to other types of climate archives. So, we have a lot of additional information that we can use to develop new methods and to better understand the glacial ice archive.

The ice cores that we drill out of the Alpine glaciers are the little sisters of the polar ice cores. In the Arctic and Antarctic, we can see far into the past, for example in terms of the changes in greenhouse gases and temperature.

How does work differ between the Alps and the poles?

Bohleber: The glaciers in the Alps are smaller and have complicated flow movements. This makes it difficult to determine the age of the comparatively short cores. Various methods and the additional data available to us for the Alpine region can help.

How long have researchers been drilling in the Alps?

Bohleber: Ice cores have been studied in the Alps for over 40 years. It was a while before we were able to characterize the importance of the Alpine glaciers as climate archives. It also depends on the location. For us to be able to drill a complete stratification in ice cores, the snow must be continuously archived at that site. So, it has to stay very cold all year round to avoid melting. For a long time, it was thought that only areas over 4,000 meters were suitable, and there are not many such areas in the Alps.

How far into climate history can you see in the Alps?

Bohleber: The Monte Rosa area, on the border between Italy and Switzerland, and the Mont Blanc area have long been the main targets for ice core drilling in the Alps. The ice is 100 meters thick in both places. How far into the past we can see depends on the annual snow deposition. Especially in ice cores from the Mont Blanc region, we can trace back with good resolution over about 100 years how the chemistry of precipitation, and with it the air quality, has changed. The further we go back, the narrower the layers in the core become. This comes from shearing movements in the ice and limits how far back we can see.

Especially in ice cores from the Mont Blanc region, we can trace back with good resolution over about 100 years how the chemistry of precipitation, and with it the air quality, has changed.

How old is the oldest ice that we know from the Alps?

Bohleber: If it is cold enough that the glacial ice freezes to the rock at the bottom, it does not slide down the mountain and can get very old. It is severely deformed by shearing movements. New research from the Mont Blanc area shows that there is ice on the rock that is several thousand years old. But near the bedrock, the resolution of the analysis methods is usually not sufficient to make detailed statements. Due to the wind, only about 10 percent of the annual precipitation actually remains on the Monte Rosa saddle. Then the processes take longer. Precipitation from a thousand years ago can be found in the bottom third of the ice core. But here, too, the resolution becomes a challenge. You can go back further than the Middle Ages, possibly even several thousand years, but you can usually no longer make precise statements about the climate at the time – only about long-term trends.

How is the age of the layers determined?

Bohleber: The breakthrough was the C14 method for ice, which allows us to examine the carbon built into the ice. In addition, the annual layers can be counted like the annual rings of a tree. Then there are the events that have left fixed markers in the ice, such as Sahara dust or the atomic bomb tests, which peaked in 1963. If we combine the C14 analysis with the annual rings and our models of the ice flow, the error in the determined age is usually less than 10 percent. If there is also a fixed marker nearby, the dating can be even more accurate. Such age determination allows a comparison with other climate archives.

Can you combine the Alpine cores with those from the polar regions?

Bohleber: A comparison with Greenland is not easy because of glaciological differences, the distance from the Alps, and because the time scales do not really match. Alpine ice cores reach a few thousand years, which corresponds to a small part of the time window in ice cores from Greenland. However, traces of anthropogenic emissions have now also been found there.

A lot could still be researched from Alpine ice cores, for example about the conditions in the Little Ice Age or the Medieval Warm Period.

What else can the Alpine ice cores tell us?

Bohleber: I would say that we can already read a large part of the climate book in ice. At the same time, there is still a lot to learn. I think that we could extend the climate archive further into the past through technical improvements. Perhaps in the future we will also find other parameters that allow us to draw more reliable conclusions about the temperatures in the past. A lot could still be researched from Alpine ice cores, for example about the conditions in the Little Ice Age or the Medieval Warm Period.

Are there promising areas for new drilling sites?

Bohleber: Researchers at the OeAW Institute in Innsbruck are now searching for old ice in the Eastern Alps below 4,000 meters and have already found some, for example at the Weißseespitze in the Kaunertal. This is often not a continuous archive, but it allows unique, selective insights. If we can date the ice at the bottom of glaciers, we also know the maximum age and when the areas were last ice-free. In this way we can learn something about the development of the glaciers during the warm period of the past 10,000 years, and hopefully make more precise predictions for their future.

Is the work threatened by climate change?

Bohleber: Yes, an urgent question is how long these archives will be preserved. Especially in the Eastern Alps, these records are rapidly melting away. Time is short, because most of the information is already lost when the glacier warms up at the bottom. We will probably lose the current research season on site on the glaciers due to the corona crisis, which increases the pressure even more.

Pascal Bohleber is a researcher at the Institute for Interdisciplinary Mountain Research of the OeAW in Innsbruck. His research focuses include climate reconstruction using ice cores and new dating methods for ice cores and mountain glaciers. 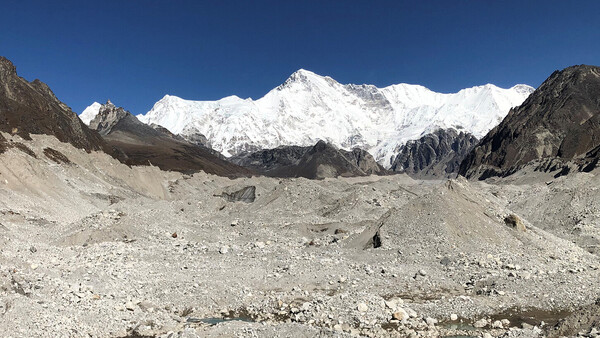 "If you want to enjoy glaciers, you should do it soon"