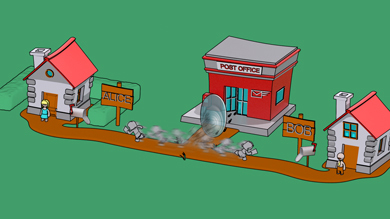 Let’s start with a thought experiment: Alice, Bob and Clara are three young professors at the Physics Department. Recently, they started feeling extremely exhausted by grant proposal and paper writing, and a doctor strongly recommended them to take a break in the countryside, and strictly forbade them to use any modern technologies such as notebooks, mobile phones, or the internet. They thus take a vacation and move to a small, secluded village: Clara is accommodated in the center near the small post office, whereas Alice and Bob stay at opposite ends of the village. One day, Clara receives an important telegram from the Department stating that they urgently need to know whether Alice and Bob share the same opinion on a crucial verdict. The telegram arrives at 11:40 and the post office closes at 12:00 sharp. Unfortunately, Clara realizes that she has no time to inform both Alice and Bob on the matter and send the telegram back, as she needs at least 10 minutes to reach either Alice's or Bob's house. It seems thus obvious that, under these unfortunate conditions, at most only one between Alice’s and Bob’s opinion would be delivered to the Department – depending on Clara’s preference to go to Alice’s or Bob’s place first.

This is not so obvious anymore if Clara (the information carrier) is a quantum object. Indeed, Flavio Del Santo from the University of Vienna and Borivoje Dakić from the Institute for Quantum Optics and Quantum Information (IQOQI) of the Austrian Academy of Sciences have demonstrated that if an information carrier is put into a superposition of different spatial locations, it can carry the message both ways, from a sender to the receiver and vice versa, achieving the so-called two-way communication using a single information carrier only.

“If we want to transmit messages between different locations, it seems oblivious that whatever object stores and carries this information, has to appear at all of these locations,” says Del Santo. “However, if we put the physical carrier into a quantum superposition of those locations, it has an amazing power to collect, store and carry the information from distinct locations simultaneously”.

These results clearly open novel scenarios for communication protocols that can save time and resources, as it was not classically conceivable.