Researchers in Austria use lasers to levitate and cool a glass nanoparticle into the quantum regime. Although it is trapped in a room temperature environment, the particle’s motion is solely governed by the laws of quantum physics. The team of scientists from the Austrian Academy of Sciences, the University of Vienna, and the Massachusetts Institute of Technology published their new study in the journal Science. 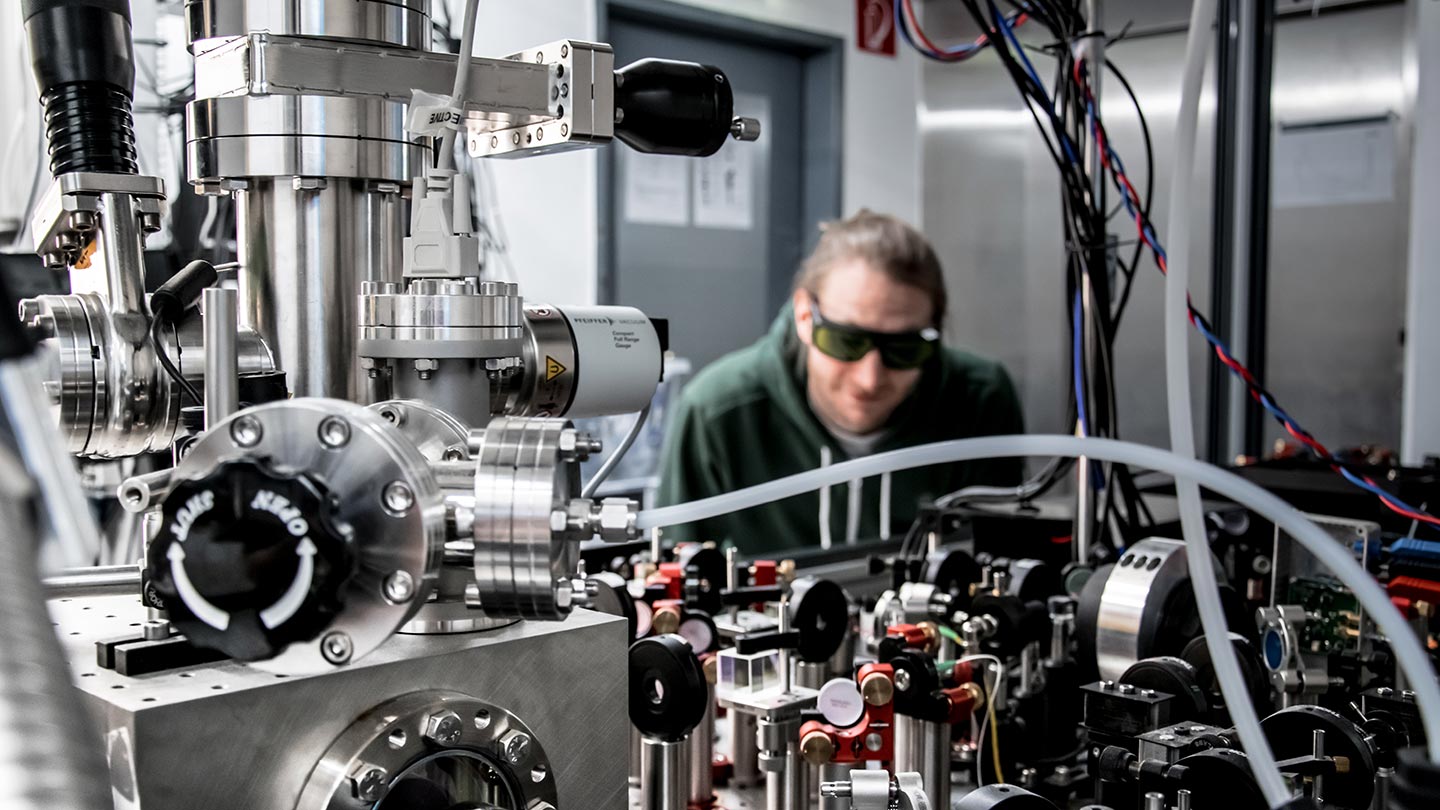 Scientists from Vienna working on the experiment that cooled a levitated nanoparticle to its motional quantum groundstate. © Lorenzo Magrini, Yuriy Coroli; University of Vienna

It is well known that quantum properties of individual atoms can be controlled and manipulated by laser light. Even large clouds of hundreds of millions of atoms can be pushed into the quantum regime, giving rise to macroscopic quantum states of matter such as quantum gases or Bose-Einstein condensates, which nowadays are also widely used in quantum technologies. An exciting next step is to extend this level of quantum control to solid state objects. In contrast to atomic clouds, the density of a solid is a billion times higher and all atoms are bound to move together along the object’s center of mass. In that way, new macroscopic quantum states involving large masses should become possible.

However, entering this new regime is not at all a straightforward endeavour. A first step for achieving such quantum control is to isolate the object under investigation from influences of the environment and to remove all thermal energy – by cooling it down to temperatures very close to absolute zero (-273.15 °C) such that quantum mechanics dominates the particle’s motion. To show this the researchers chose to experiment with a glass bead approximately a thousand times smaller than a typical grain of sand and containing a few hundred million atoms.

Isolation from the environment is achieved by optically trapping the particle in a tightly focused laser beam in high vacuum, a trick that was originally introduced by Nobel laureate Arthur Ashkin many decades ago and that is also used for isolating atoms. “The real challenge is for us to cool the particle motion into its quantum ground state. Laser cooling via atomic transitions is well established and a natural choice for atoms, but it does not work for solids”, says lead-author Uros Delic from the University of Vienna.

For this reason, the team has been working on implementing a laser-cooling method that was proposed by Austrian physicist Helmut Ritsch at the University of Innsbruck and, independently, by study co-author Vladan Vuletic and Nobel laureate Steven Chu. They had recently announced a first demonstration of the working principle, “cavity cooling by coherent scattering”, however they were still limited to operating far away from the quantum regime.

“We have upgraded our experiment and are now able not only to remove more background gas but also to send in more photons for cooling”, says Delic. In that way, the motion of the glass bead can be cooled straight into the quantum regime. “It is funny to think about this: the surface of our glass bead is extremely hot, around 300°C, because the laser heats up the electrons in the material. But the motion of the center of mass of the particle is ultra-cold, around 0.00001°C away from absolute zero, and we can show that the hot particle moves in a quantum way.”

The researchers are excited about the prospects of their work. The quantum motion of solids has also been investigated by other groups all around the world, along with the Vienna team. Thus far, experimental systems were comprised of nano- and micromechanical resonators, in essence drums or diving boards that are clamped to a rigid support structure. “Optical levitation brings in much more freedom: by changing the optical trap - or even switching it off - we can manipulate the nanoparticle motion in completely new ways”, says co-author Nikolai Kiesel.

Several schemes along these lines have been proposed, amongst others by physicists Oriol Romero-Isart and Peter Zoller from the Austrian Academy of Sciences in Innsbruck, and may now become possible. For example, in combination with the newly achieved motional ground state the authors expect that this opens new opportunities for unprecedented sensing performance, the study of fundamental processes of heat engines in the quantum regime, as well as the study of quantum phenomena involving large masses. “A decade ago we started this experiment motivated by the prospect of a new category of quantum experiments. We finally have opened the door to this regime.”